Tolkien Media: Tolkien Himself on Film

I believe that there are only two instances where J.R.R. Tolkien was interviewed on film. The first dates from 1962, and the second from 1968.

The first, by John Bowen, was conducted on 10 December 1962, in black-and-white, for the BBC television program "Bookstand". The episode was broadcast two days later, on Wednesday, 12 December, from 10.15-10.45 pm, though the Tolkien segment took up less than nine minutes. John Bowen (1924-2019) was a writer (of novels and dramas, and two children's books) who also worked in television from 1960 through the mid-1980s. He had been an undergraduate at Pembroke College, Oxford (B.A. 1951), and served as the editor of undergraduate magazine Isis. He then read Modern History at St. Anthony's College (M.A. 1953). Bowen was quite an interesting person.  His Guardian obit is here; and a Wikipedia page here. Some snippets of Bowen's interview with Tolkien have, over time, reappeared in various later programs on Tolkien, the most accessible being a one-minute clip* (just after the 37 minute mark) in the "J.R.R. Tolkien" episode (48 minutes long) of the BBC six-episode series An Awfully Big Adventure (1998). (The Tolkien episode was the fourth, broadcast on 21 February 1998. The other episodes were on E. Nesbit, Kenneth Grahame, Arthur Ransome, Dr. Seuss, and Roald Dahl.)

I don't know whether the "Bookstand" episode has ever been made public in its entirety, at least since the original broadcast. In some comments from it that I have seen Tolkien made the point (which has been debated by scholars) that The Hobbit was an attempt to write something outside of his already-constructed world, but the hobbits grew into this world: "they became drawn into it."  Another interesting assertion by Tolkien comes after Bowen's comment that Mordor is based on a principle of absolute evil:  "I don't believe in absolute evil, but I do believe in absolute good." Finally, Tolkien comments that there is no religion in The Lord of the Rings for reasons partly aesthetic, partly authorial, and partly because the book comes at the end of a long series of stories which would already explain why there are no visible temples, etc.

The second instance of Tolkien being interviewed on film was in 1968 for the BBC program Release, which was normally made up of two twenty-plus minute segments. The Tolkien part, titled Tolkien in Oxford, was filmed between the 5th and 9th of February 1968. It was directed by Leslie Megahey (b. 1944), who like Bowen had been an undergraduate at Pembroke College, Oxford (B.A. 1965), and he and journalist John Ezard (who had previously interviewed Tolkien for newspapers) were Tolkien's (mostly off-screen)** interviewers. The program was broadcast on 30 March 1968, from 9.50 to 10.35, with the Tolkien segment apparently following one on the sculptor Barbara Hepworth. The Tolkien part of the program clocked in at about 26 and a half minutes, and in 2014 the BBC posted it online through their archives. It can be seen by clicking here (though there are location restrictions; a google search may turn up other appearances).***

The footage of Tolkien himself is only about seven and a half minutes total. Some of these Tolkien scenes have been clipped and reused in later documentaries on Tolkien. The 1968 program has, basically, four types of filmed color scenes. The most interesting type is those in which Tolkien discusses his works. These were filmed at the Old Palace, the Catholic Chaplaincy in Oxford. Here is an establishing shot showing Tolkien sitting in front of a fireplace. 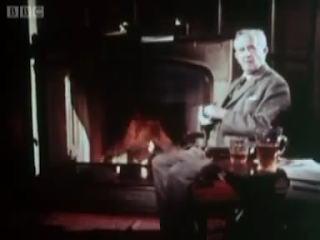 Most of this footage shows Tolkien in closeup. 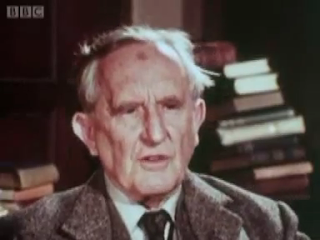 The next type of footage was shot at night while Tolkien watched fireworks at the Dragon School in north Oxford. This footage has little dialogue. (Tolkien's grandson, Simon, then aged 9, appears briefly next to his grandfather at the 13 minute-2 second mark.) 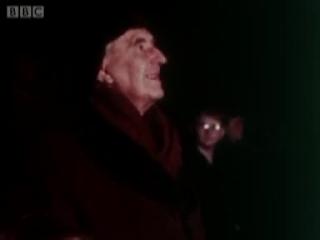 The third type of footage shows Tolkien walking around in the daytime in Oxford, sometimes wearing a hat, sometimes without it. 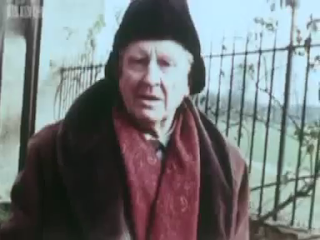 Besides the above filmed scenes, the 1968 program includes some still photos of Tolkien having lunch at the Eastgate Hotel. Here is one. 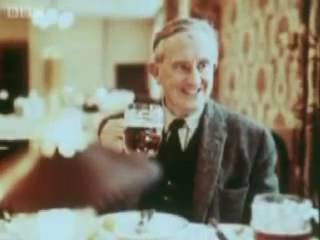 The above samples should make it possible to determine the origin of the various clips of Tolkien that reappear in later documentaries.

For many years it was rumored that there was a lot of film footage of Tolkien that was not used.  Finally, beginning in 2001, some of this material turned up****, and recently it has been made available in selected forms. Tolkien scholar Stuart Lee has been very active in presenting this new material. Here is the link to an short (under four minutes) introduction by Stuart Lee in a video put out by the University of Oxford in 2016.

A showing of some of the clips, with commentary by director Leslie Megahey, was arranged in Oxford in 2014. The 37-minute discussion between Lee and Megahey can be heard on a podcast here.

Leslie Megahey spoke at the Annual General Meeting of the Tolkien Society in April 2015. A video (without the documentary audio or visuals) can be viewed here.

Most significantly, Stuart Lee produced a long history of the program, with transcriptions of Tolkien's commentary, as "'Tolkien in Oxford' (BBC, 1968): A Reconstruction" which appeared in Tolkien Studies volume 15 (2018): pp. 115-176. It is highly recommended.

I'm very grateful to Charles E. Noad who shared his expertise as I was putting together this post.

*About thirty seconds of this section is available here on youtube (with Finnish subtitles), beginning at the 9-second mark.

**Director Leslie Megahey appears walking alongside of Tolkien near Merton College, at about the 5 minute-20 second mark.

***In the text on the BBC Archive page it names John Ezard incorrectly as "John Izzard", and it suggests that Ezard met Tolkien at his home, implying that some footage might have been filmed there. This seems very unlikely, for a number of reasons, not least of which would be Tolkien and his wife's concern for privacy. They had been very annoyed when W.H. Auden had been quoted in the press in January 1966 as saying of Tolkien: "He lives in a hideous house--I can not tell you how hideous, with hideous pictures on the walls." Stuart Lee has suggested that the shots of Tolkien in front of a fireplace were taken at his home on Sandfield Road. I don't think that Tolkien would have allowed a film crew in. And those shots of Tolkien by a hearth are compatible, if taken from a wider view and from a different angle, with the the close-up shots of Tolkien at the Oxford Catholic Chaplaincy. In fact when you compare the shapes of the arms of the chair in which Tolkien is seated, and the positioning of the beer on the table next to Tolkien, it seems to be the same location. Additionally, it would have been both time-consuming and expensive for the film crew to set-up in Tolkien's house for merely a few shots.

****Some audio clips were used in Brian Sibley's J.R.R. Tolkien: An Audio Portrait (2001), issued on CDs. Some video clips appeared in the not-very-good 80+ minute documentary J.R.R. Tolkien: Master of the Rings--The Definitive Guide to the World of the Rings (2001), the full of which is currently available here. [NB: There is an entirely different documentary of approximately 60 minutes, also released in 2001 and similarly and confusingly titled The Master of the Rings. To add further confusion the 80+ minute documentary was itself retitled and repackaged in 2004 as The Story of J.R.R. Tolkien: Master of the Rings.]  Stuart Lee has noted that some of these JRRT clips were subsequently posted online. (The Romanian Tolkien Society sometime posted a sequence of seven video outtakes: numbers 2, 6 and 7 are from the 2001 documentary.  Numbers 3, 5 and 6 are very short and without sound.  The first of the seven can be accessed here--the rest will play sequentially afterwards.) In April 2007, along with the release of The Children of Hurin, two additional clips appeared on BBC's Newsnight. (The 5 minute-10 second news story, which also features Tolkien's grandson Adam, is accessible here, with the two JRRT clips beginning at the 40 second mark, and at the 3 minute-36 second mark.)  Another two clips, spliced together to make nearly three minutes, appears here.
Posted by Douglas A. Anderson at 12:30 AM