It's hard to believe that Robert Holdstock passed away ten years ago today, on November 29th, 2009.  I loved most of his Mythago Wood series, but especially liked the second volume, Lavondyss, which I thought the finest fantasy novel published in the 1980s.  In honor of his memory, I'm re-reading one of his great short stories,"The Ragthorn" (with Garry Kilworth). If you've never read Holdstock, give that story a try.

Posted by Douglas A. Anderson at 2:00 AM No comments:

Email ThisBlogThis!Share to TwitterShare to FacebookShare to Pinterest
Labels: Robert Holdstock, The Ragthorn

My messy year of 2019 actually began in the summer of 2018, after a close lightning strike fried the electronics in my house, including my computer (despite it being hooked into a surge suppressor). Regaining equilibrium has been a slow process, for many reasons that I need not recount here. For now I'm dipping my toe back into the Tolkienian blog waters . . .

I'm using the term "Tolkienian resonances" in this post's title to refer to some things that predate Tolkien's own relevant works, but are certainly not influences. They could perhaps be called precursors, but that seems too expansive a term. In any case, a few of these works with such resonances are interesting, and I recount them here.

First, there is the discovery by Mark Hooker of the poem "The Orc and His Globular Island." Hooker wrote about it in the November 2019 issue of Beyond Bree. The poem is interesting not only for its use of the word orc, but for the orc's similarities to Gollum in The Hobbit. This orc lives on an island, where he is "exceedingly lonely." He is long-lived (and hasn't had an adventure for a century), always short on food, and to pass time he "thinks up a comical riddle, and guesses it."

"The Orc and His Globular Island" was published in the American magazine for children, St. Nicholas: An Illustrated Magazine for Young Folks, in October 1913 (Volume 40, p. 1070). It was written by E.L. McKinney, a recent Harvard University graduate (Class of 1912) whose full name was Edward Laurence McKinney (1891-1968). He was apparently a lifelong resident of Albany, New York, where in the 1910s he was employed at his father's iron-works. He contributed to The Harvard Advocate in 1911, and also to The Century, and St. Nicholas. Most of his publications were of light verse. His only-known volume was a fine press miniature book, The King of Indoor Sports (1963), containing  humorous anecdotes about typewriting. Here is the page from St. Nicholas with his poem (click on the image to make it larger). Even the image of the Orc seems almost Gollum-like. 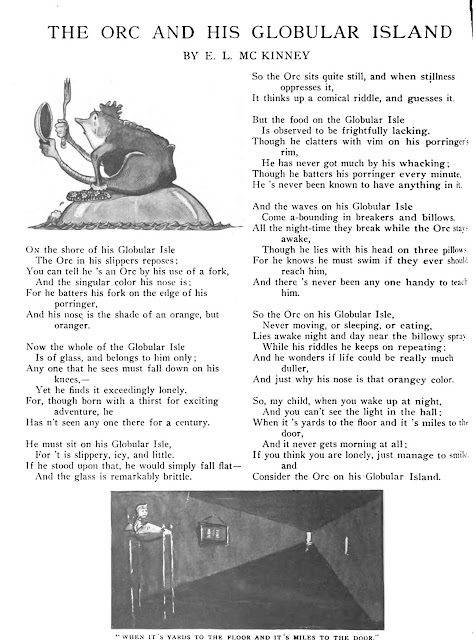 Interestingly, the same issue of St. Nicholas also contains some of "The Nursery Rhymes of Mother Goose," illustrated (mostly in black and white) by Arthur Rackham. But there is one color plate, an illustration for "Hey! Diddle, Diddle," which of course can be related to Tolkien's famous poem "The Man in the Moon Stayed Up Too Late," published in The Adventures of Tom Bombadil (1962), which first appeared in Yorkshire Poetry in 1923 under the title "The Cat and the Fiddle: A Nursery Rhyme Undone and its Scandalous Secret Unlocked." Anyway, just for fun, here's the Rackham illustration. (Rackham's texts and illustrations were collected in 1913 in his book Mother Goose: The Old Nursery Rhymes.) 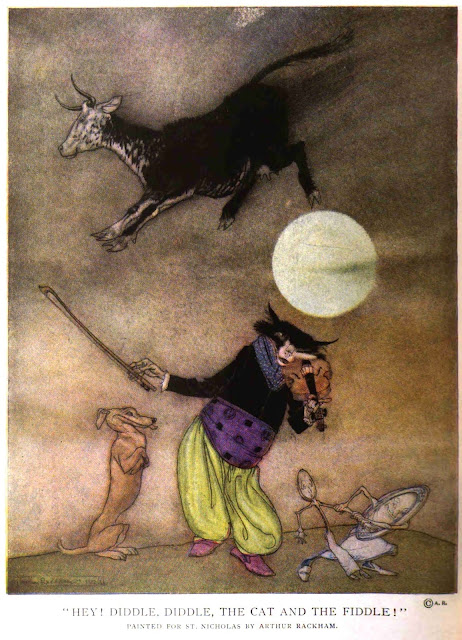 Tolkien's ring of invisibility (as found first in The Hobbit) is often sourced back to the Ring of Gyges in Plato's Republic,  though I think this instance is more of a precursor than an actual source. I've recently discovered in an Edwardian children's book an exceptionally good and what seems to be a likely source for several of the qualities of Tolkien's (pre-Lord of the Rings) ring of invisibility. I'll write more about this in another place, but here I'd like to share a story from 1943 about a ring that brings power to its bearer, as well as working disaster, in the way of the One Ring in The Lord of the Rings. The story, by Nelson Bond (1908-2006), was first published as "The Ring of Iscariot" in The Blue Book Magazine, June 1943. Bond collected it under the title "The Ring" in his 1949 collection, The Thirty-First of February.

The story is set after W.W. I. where the main character, Otto Muller, is the Berlin correspondent for a New York newspaper. At an auction Muller becomes obsessed with acquiring a ring, reputed to have come from the Kaiser's personal collection. The bidding goes high, and his competition, a priest, pleads with him to cease, saying that it is of utmost importance that he --the priest-- buy the ring. In the end, Muller wins the bidding for ring, and his luck quickly changes. His misfortunes turn out dramatically for the better. But the ring, a trifle large, has a tendency to slip off his finger, so he instructs his wife to send it to a jeweler. Meanwhile, the priest tracks him down, offering to buy the ring at over three times the price paid, but Muller refuses, noting that is has become a good-luck piece. The priest retorts, "Not good luck, no! The reverse." The priest wants the ring to exorcise it, noting that a force of evil is embodied in the ring, for it is the Ring of Judas:  "The history of this ring's ownership is one of terrible, brief grandeur followed by black tragedy." The curse of Iscariot's ring is that "he who wears it shall aspire and win to world-shaking greatness." Muller recognizes the effect that the ring has had on himself, and promises to give the ring to the priest. Returning to his wife, he discovers that she hasn't yet gone to the jeweler, but the ring is now missing, evidently stolen by the assistant to the old paperhanger who is working in that room. The assistant has departed, but the old man says, "he is a bad one, that one. I curse the day I ever laid eyes upon him . . . common little thief! His name is Shicklgruber. But it is Hitler he calls himself these days . . . Adolf Hitler." The story ends here.  (Note: the idea that Hitler had been born Adolf Shicklgruber has been debunked, but was a common belief in the 1940s. See this entry at the OUP blog.)

I've been asked a few times in the last few years if I am the same "Doug Anderson" who did artwork for the Middle-earth game from the late 1990s. Nope, that's not me.  And I'd never seen the artwork until one of the people who asked sent me a sample.  Here it is. Far better art than anything I could produce. 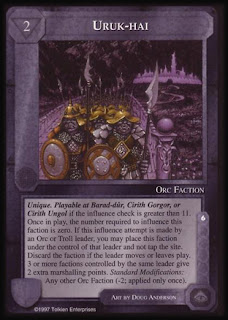