Lost in Translation (the German one, specifically)


From one perspective, the idea of having one’s work translated into a foreign language is a kind of small but pleasurable honor, or at least it should be. It’s always nice to see one’s own work getting wider distribution, and in a language other than one's own. But with most scholarship (scholarship usually in the form of articles), this is all one gets.  With commercial work one usually benefits financially in a modest way from the sale of translation rights. Yet for me, most translations have been a source of problems and aggravations, and this has been a recurrent situation now for over two decades.

My Annotated Hobbit was first published in 1988, with a revised edition in 2002,   The first translation was into Spanish in 1990, an edition I learned about two years afterwards. I hadn’t been informed about it, nor was I paid for it. I complained to my publisher, Houghton Mifflin, and was given what became a usual run-around, but eventually I was paid my percentage for the translation rights.  In the subsequent twenty-odd years, the process has repeated itself numerous times.  Basically, the only way I’ve ever gotten paid for translations, is to complain about them many months after the translations have appeared, and even then I’m given various excuses that it was a mistake and various promises that it won’t happen again.  Hah. This seems the modus operandi for this publisher (and its UK associate, HarperCollins).  With my books from other publishers, not only have I been involved when the translation rights were first negotiated, but I have also been paid for them in a timely fashion and was even sent copies of the published translations. All the copies I have of translations of my Annotated Hobbit have been acquired on my own, including the Spanish (1990), Italian (1991, 1997, 2000, 2004), Japanese (1997) and Hungarian (2006) editions.

In the last year I have heard of four new translations of The Annotated Hobbit, all published in 2012 (and probably contracted the year before), and none of them have shown up on my royalty statements.  These include the German, Polish, French and a new Japanese translation.  A friend kindly gave me a copy of the new Japanese translation.  I haven’t seen either the French or Polish editions, but I recently received a copy of the German translation which I ordered for myself from an online bookseller. 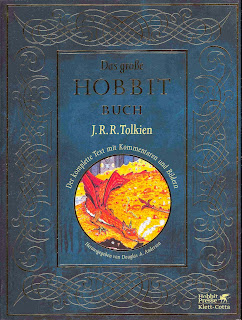 The first reaction—short-lived—was that Hobbit Press/Klett-Cotta had done a nice presentation for Das Große Hobbit Buch [i.e., The Big Hobbit Book].  But the more closely I’ve looked at it, the more problems I’ve seen, and some of them are (to me) very serious. First, there is a tipped in erratum page, for the last four paragraphs of chapter eleven of The Hobbit were mistakenly dropped from the book as printed.

Most translations of The Annotated Hobbit have some differences from the original—e.g., some notes on the various English texts of The Hobbit might be cut, and since they have little relevance to the language into which the whole has been translated, one can understand.  Also, the illustrations are often moved around, re-sized, and sometimes omitted.  Such cuts may be regrettable, but there is at least an argument as to why they have been made.

With the Das Große Hobbit Buch, the first thing I noticed was an added afterword on “The Hobbit in Germany” by the translator, Lisa Kuppler.  It’s an interesting addition, and certainly relevant for the German audience.  And the book-covers of various German editions of The Hobbit have been added to the color plates in the middle of the book.  Again, a nice addition.

But when I turned to the translation of my “Foreword” I began to notice problems.  My foreword is dated (correctly) March 2002 in German, yet in the list of abbreviations I see a number of books that weren’t published until after 2002, like John D. Rateliff’s admirable History of The Hobbit (2007).  It is given an abbreviation “History” to correspond to citations in my text.  Of course, in 2002, there were no citations to it in my text, and my in-text reference “History” referred to the “History of Middle-earth” series.  In the German translation, this has been altered to the ugly acronym which I avoid, “HoME”.  There are other changes in the foreword, but with increasing aggravation I turn the pages to find further annoyances.

There are new footnotes sprinkled throughout the book, and new paragraphs of information added frequently to existing annotations.* And the extremely irritating fact is that these additions all appear to be by me.  They are not.  Even worse, I look at the copyright page, and see several lines of permissions for the Tolkien texts, and lines of copyright notice for the German translation, but no acknowledgement of my copyright in the annotations or any permission acknowledged for their use. Which makes me wonder whether Klett-Cotta even licensed the rights for them.

In compiling The Annotated Hobbit, I worked closely with the Tolkien estate, and I took especial care to make the annotations accurate and uniform in approach. This German translation eviscerates that care, and puts in material that was neither seen nor considered by me. (And it’s not like I’m difficult to contact—I am in touch with a number of German Tolkien-scholars who know how to reach me, not to mention having this public blog.)  Das Große Hobbit Buch is self-evidently based on my work, yet it has been re-edited on a line-by-line basis, with additions and subtractions that are not mine, and of which I had no knowledge of previously. This seems a process far and away from what is appropriate for an act of translation, and I feel it necessary here to disavow Das Große Hobbit Buch as not representing my work. It really appalls me that a publisher and translator would take such unwonted liberties.

*To give just one example (not untypical of what I see throughout the translation), I note that with regard to my annotation 5 to Chapter 7 (p. 165 of the 2002 US edition), which concerns Beorn and an analogue Bothvarr Bjarki in The Saga of Hrolf Kraki, the German translation has some additional sentences (not written by me) about Tolkien’s unpublished story “Sellic Spell” as a retelling of the lost fairy tale of Beowulf (which isn’t an accurate description of what “Sellic Spell” is), also telling us that the manuscript of “Sellic Spell” is now preserved in the Bodleian Library in Oxford. I did write of “Sellic Spell” elsewhere in The Annotated Hobbit (annotation 9 to Chapter 15, p. 324-5 of the 2002 edition), but the translator has removed those references, and taken some of my words from there to make a point I did not want to make in an earlier position, as well as pretending to know more than is relevant. The manuscript of “Sellic Spell” is indeed in the Bodleian (a fact I would not think that needs mentioning), but as it is in the restricted papers, it is not generally accessible to the public. I have read “Sellic Spell” and presumably the translator hasn’t. So why is the translator allowed to put words in my mouth about it that I would not say?