This topic came up several years ago, but has gained currency on the web. There are no letters by Smith in which he discusses Tolkien, but only in a reminiscence by Smith's late-in-life friend, Dr. William Farmer (1938-2015), in which Tolkien is discussed. The full April 2005 interview with Farmer by Larry Fischer is available here at Eldritch Dark, but let me quote the relevant Tolkien-related passages (my emphasis added in red):


L F: Which books published since CAS's death do you wish you could have shared with him?

Dr F: Oddly enough, probably the Harry Potter series — Clark would have loved the subtle fun poked at the English public schools — and the manner in which real evil is contrasted as something far more sinister than the trivial media representations, and posturings of Satanists. The best translations of Kazantzakis were not available and he would have loved those works — particularly I think, his Odyssey, A Modern Sequel. [T.E. Lawrence's] Seven Pillars of Wisdom was not available to the general public when he was young, and I don't think he ever got to it again, and by the time I had read this great work, Clark was gone. I would like to have re-visited Tolkien's stuff with Clark after I had a master's seminar with Dr. Tolkien in '63. I think, too, that some of Don Fryer's work inspired by Clark would be good to have gone over with Clark — he would have appreciated Don more, and would have had more opportunity to get to know him as I did. I think he might have enjoyed seeing [Ray Bradbury's] Martian Chronicles on film — the advent of the video could have been interesting to share with Clark. Most "sci-fi/fantasy" or "sword & sorcery" has not captured my interest or attention — to have been worth discussing with Clark, there must be more than just story — there must be some deeper current that stirs beneath the surface, subtly gripping the reader and leaving him uncertain as to what just happened to him at the end of the book — "best look again..."

L F: How much Tolkien and C.S. Lewis did CAS read, and what did he make of what he read?

Dr F: He read all of it he could get his hands on — The Allegory of Love would have frustrated him because he had little Greek, Italian, and Anglo-Saxon and the book is not foot-noted.

Tolkien's creation of an entire history, obviously biblically parallel, with its own several languages and grammar he admired immensely. In discussing it briefly at odd interludes, he always came back to the basic remembrance: "Sauron is only a servant". He always felt real evil was something Tolkien understood as something infinitely more profound and dangerous than trivial little dilettantes like [Anton] LaVey [of the Church of Satan] and his ilk could imagine — he would be amused by the common theme in many books and films where some very bad person desires great power and calls up an ancient horror he thinks he can control, only to be utterly consumed by it when he at last succeeds.

The comment about Farmer having attended a master's seminar with Tolkien in 1963 rang a bit odd with me, as Tolkien retired from teaching in 1959, but returned for two terms in October 1962 through April 1963 when his colleague C.L. Wrenn was on sabbatical. Tolkien's duties seem to have involved only the giving of public lectures (on Beowulf). I queried Dr. Farmer on this, and he didn't provide any further details. In a post at the Eldritch Dark forum on 30 November 2011 (scroll down, here), he elaborated further:


I cannot say that Clark had read the whole Ring trilogy, and I don't recall the books being available in Paper-back at that time, so I know he didn't own any - I know that he had read "The Hobbit", and at least some of the "Fellowship..." He liked the Hobbit, and admired the inventiveness, particularly in the variation in names and language as relates to species - (cf difference between Dwarf names and Elf names). As I recall, he also expressed admiration for the consistency of the images and "leit motif" over such extended narrative - a gift he admired, but had never attempted. The single quote I recall is his having said that Tolkien appeared to be a true master of language. I was not myself at that time equipped to engage much farther in the discussion as my own knowledge of the books was limited.

Smith died in August 1961, which was indeed four years before The Hobbit and The Lord of the Rings appeared in paperback. All of what Farmer says may be true, but I think it should be qualified a bit. Some of Farmer's comments (here and elsewhere) seem to be projections of his own opinions onto Smith. I really wish we had some first-hand comments from Smith himself in lieu of second-hand comments made forty-some years after Smith's death.

On the other side of the coin, we do know that in 1964 Tolkien read at least one story by Clark Ashton Smith.  L. Sprague de Camp had sent Tolkien a copy of his mass-market anthology Swords & Sorcery (Pyramid Books, published in December 1963).  Tolkien's copy, dated by him July 1964, with some hastily scrawled pencilled notes was on sale many years ago (see here), and I noted that Tolkien didn't much care for the Clark Ashton Smith tale, "The Testament of Athammaus" (which is not one of Smith's best anyway). Tolkien felt the monster was wholly unbelievable and the story had a tooraloo of nonsense in it. Tolkien wrote more diplomatically to de Camp in August 1964 that "all the items seem poor in the subsidiary (but to me not unimportant) matters of nomenclature. Best when inventive, least good when literary or archaic." 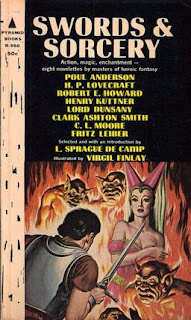 Posted by Douglas A. Anderson at 2:00 AM No comments: