I cover here some ephemera related to the Ballantine Adult Fantasy series. First, the boxed sets.  I know of three of them. 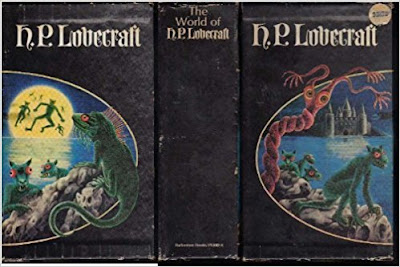 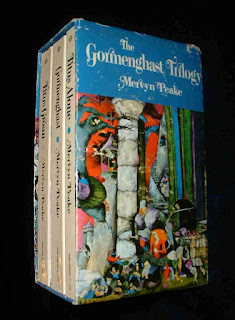 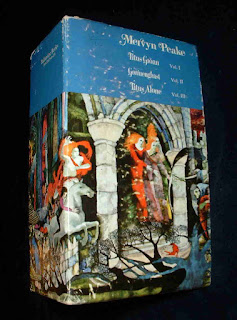 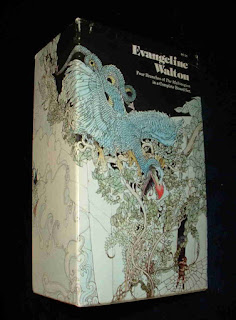 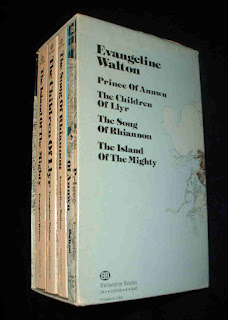 Interestingly, Ballantine published three posters related to the series.  These all showcase artwork by Gervasio Gallardo, but his illustrations for the Lovecraft covers are not really his best work.  I have somewhat shabby copies of all three posters, and have (with difficulty) photographed them. All three were issued in the Spring of 1971, priced $2.50 each. 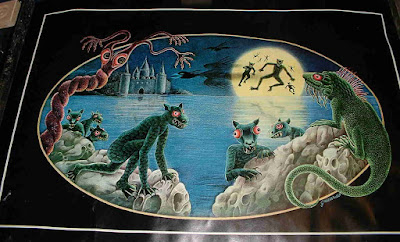 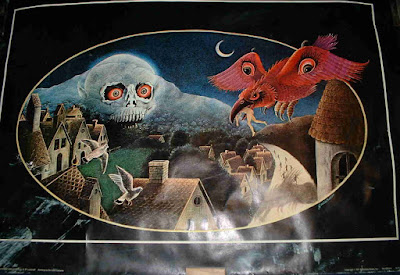 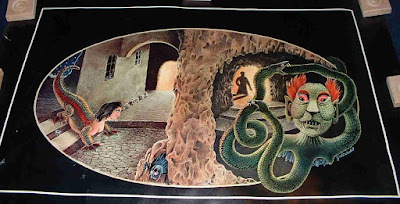 An another front, my copy of Excalibur by Sanders Anne Laubenthal has a review slip in it: 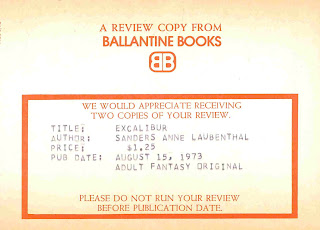 And finally, some of the file copies owned by Betty and Ian Ballantine were sold in the past, and my Cabellian friend Bill Lloyd (see The Silver Stallion website) sent me this scan:

Does anyone know of further Ballantine Adult Fantasy series ephemera?  I'd be glad to hear of any such items.

The iconic list (or at least the starting point) for a definitive bibliography of all of the titles in the Ballantine Adult Fantasy series is the one by Lin Carter which appears as “Bibliography II” in his book Imaginary Worlds, published in June 1973, itself a volume of the series. Carter lists 57 numbered volumes of the series, as published from May 1969 through May 1973.  The series would officially last one further year, bringing the official total to 65 volumes.

But Carter’s list, even when extended with the further official titles, doesn’t cover outliers that, for one reason or another, seem like they should be considered as part of the series. There are three main types of potential outliers—fantasies published by Ballantine 1) before the series; 2) during the series, and 3) after the end of the series. Carter began his Bibliography in Imaginary Worlds by listing sixteen such precursors, noting “they are all books I would certainly have urged Ballantine to publish.”

I will consider these sixteen titles first, and list them here with Carter’s numbering.

The J.R.R. Tolkien books (nos. 1-5, 9 and 15) were never published under the imprint of the unicorn’s head logo, but some of the others were.

Of the E.R. Eddison books (nos. 6-8, and 16), the U.S. “Seventh Printing (September 1973) of The Worm Ouroboros is the only printing of any of the titles with the unicorn’s head logo.  The first U.S. printing of The Mezentian Gate, however, is marked “A Ballantine Adult Fantasy” in small print running up the spine on the upper cover (it appeared in April 1969, the month before the series proper started).  All four Eddison titles were advertised and sold in their Pan/Ballantine editions as part of the Pan/Ballantine Adult Fantasy series, though they did not have the unicorn’s head logo.

Mervyn Peake’s books (nos. 10-12) have the unicorn’s head logo only on two U.S. printings of each of the three books:  the “Fourth Printing: September, 1973” and the “Fifth Printing: January, 1974”.  The Peake titles were not published in the Pan/Ballantine Adult Fantasy series, because the U.K. rights were held by another publisher, Penguin Books, who published editions of all three books in 1968, 1969 and 1970, respectively. The Penguin editions were reprinted a number of times over the next several years.

The Ballantine edition of Peter S. Beagle’s novel A Fine and Private Place also preceded the series proper. It came out in February 1969, but that the author was Beagle and that the cover art is by Gervasio Gallardo make it of interest to fans of the series. Also, as with The Last Unicorn and Eddison’s Mezentian Gate, the words “A Ballantine Adult Fantasy” appear in small print running up the spine on the upper cover.

Carter’s list excluded his own Tolkien: A Look Behind “The Lord of the Rings,” “First Printing: March, 1969,” which came out just before the series started. It is not usually considered to be part of the series, but it is probably of interest to most fans of the series.

Next come the various titles published by Ballantine while the series proper was ongoing (May 1969 through April 1974) that have some elements in common with the Ballantine  Adult Fantasy series, but which were never considered as officially part of the series.

H.P. Lovecraft. Fungi from Yuggoth and Other Poems. “First Printing: February, 1971”
This is a retitling of Lovecraft’s Collected Poems (1963), as edited by August Derleth and published by Arkham House.  The Ballantine Adult Fantasy series published other Lovecraft title, with cover art (as here) by Gervasio Gallardo.

H.P. Lovecraft and August Derleth. The Survivor and Others. “Second Printing: February 1971”  This title was first published by Arkham House in 1957, and Ballantine published a first printing in mass market paperback in August 1962. For this Second Printing, a new cover was commissioned from Gervasio Gallardo. That these stories are bylined as “by H.P. Lovecraft and August Derleth” is a fraud.  They were entirely written by Derleth, who claimed them to be “posthumous collaborations” based on notes by Lovecraft, but these notes were (when discernable) minor idea fragments that barely resemble the stories Derleth wrote.

Sometime, Never  (“Fourth Printing: November, 1971”) was originally published by Ballantine in June 1957.  It consists of three tales of “science Fantasy” by William Golding, John Wyndham, and Mervyn Peake. It was reprinted in September 1957, November 1962, and in November 1971 when it was given a new cover by Gervasio Gallardo.  The classic Peake story, “Boy in Darkness,” and the Gervasio Gallardo cover make it of special interest to fans of the series.

Isidore Haiblum. The Tsaddik of the Seven Wonders. “First Printing:  December, 1971”. This title is occasionally erroneously included in lists of the Ballantine Adult Fantasy series, but it had only one printing, and it never had the unicorn’s head logo on it. It is called by the publisher on the cover a Science Fantasy Novel.  The cover art is by David McCall Johnston, who did other covers in the Ballantine Adult Fantasy series proper.

Lin Carter. Lovecraft: A Look Behind the “Cthulhu Mythos.” “First Printing: February, 1972”  Of Carter’s three works of nonfiction published by Ballantine, his Tolkien book preceded the Adult Fantasy series proper, and his Imaginary Worlds book was included as part of the series. Why his book on Lovecraft was not included in the series is unknown, but beside Carter’s authorship, and the subject, the cover art is by Gervasio Gallardo, and these three points make it of interest to fans of the series.

Finally, the last of the outliers come from June to November 1974, and comprise two books published after retirement of the unicorn's head logo.  These were originally intended for the series before it was cancelled. The first has a Carter introduction and the second completes a set of four begun during the series proper.

H. Warner Munn. Merlin's Ring. “First Printing: June, 1974” Munn’s book was clearly intended for the series, as it has the usual Lin Carter introduction proclaiming it to be in the series, and the wraparound cover art is by Gervasio Gallardo. It is among Gallardo’s very best.  There remains a small white circle on the front cover, here filled with the words “First Time in Print” but which was likely intended to house the usual unicorn’s head logo. A volume of associational interest, Merlin’s Godson by H. Warner Munn, came out as a “Ballantine Fantasy” with a gryphon logo on the cover in September 1976. It contains two prequel novellas, “King of the World’s Edge” and “The Ship from Atlantis,” originally published in 1939 and 1967 respectively.

Evangeline Walton. Prince of Annwn. “First Printing: November, 1974” This is the final volume of Walton’s reworkings of the four branches of the Mabinogion. The first three were published as part of the Ballantine Adult Fantasy series proper, and doubtless the fourth volume would have been too, if the series hadn’t ended some six months earlier.  And instead of an introduction by Lin Carter, Prince of Annwn has a puff piece from an article by Patrick Merla published in a November 1972 issue of The Saturday Review, that was also used to replace Carter’s introductions in the other three volumes as they had been reprinted.  The cover art is by David McCall Johnston, who also did the cover art for the second and third volumes of Walton’s series.

Any one care to suggest other possibilities?  Please do so in the comments below. 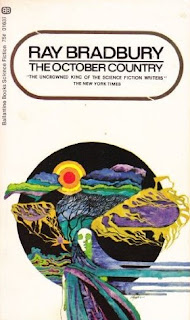