Some Oddities in the Ballantine Adult Fantasy Series

With the help of some friends, I've been trying to get a good handle on the British editions of the Ballantine Adult Fantasy series, published by Pan/Ballantine, and of the even-more-difficult-to-sort-out Canadian printings.  This post is sort of an in-progress report, with an appeal for help on certain titles.

Between 1971 and 1974, Pan/Ballantine published British editions of some 35 books from the US list. Most of these, particularly after 1971, are easily identified, for the Pan logo is noticeable at the base of the spine.  But the earlier titles, especially those in 1971, are less easy to differentiate from the US editions.  In fact, some of the editions sold in the UK were actually printed in Canada.  Here's one example, the UK edition of Lord Dunsany's King of Elfland's Daughter, published in May 1971: 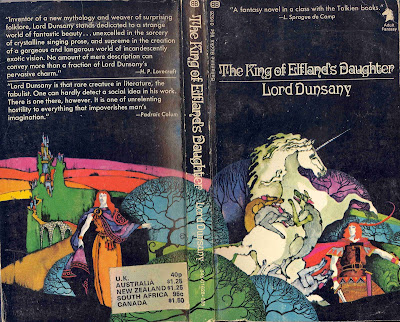 It looks basically like the US edition, but with Commonwealth prices printed on a white label that is pasted to the lower right on the back cover.  Though the title page says only "Ballantine Books" (i.e., not Pan, who is not mentioned anywhere in the book), the copyright page has another clue: 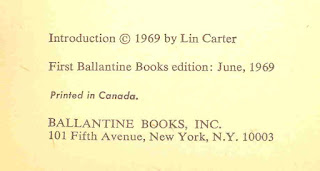 The only difference here from the US edition is the line reading "Printed in Canada."  No date is given, but it clearly was printed for the May 1971 British release (and also sold in Canada). Several of the other books I have seen that have the "Printed in Canada" line were also sold in the UK, but depending on how the rights had been handled, some of these books (unlike King of Elfland's Daughter) have an explicit statement on the cover that this edition is "Not for sale in Canada." Here's one example, the 1972 Pan/Ballantine edition of Lud-in-the-Mist: 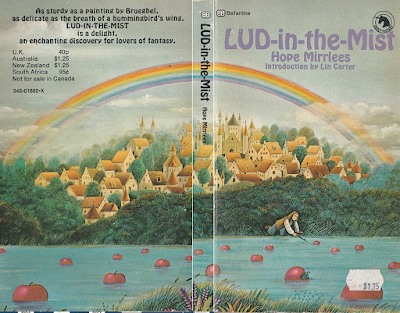 Each book in the UK series has a potentially different scenario. The simplest way to identify the UK editions seems to be the presence of some Commonwealth prices on the rear covers.  At present, there are a handful of title for which I'm still seeking information.  If anyone has the UK versions of the following titles (i.e., with the Commonwealth prices on the rear), and is willing to share information and perhaps even scans, please contact me at nodens100 at gmail dot com. The titles are as follows:


Last, here's another anomaly I found.  The cover art to The World's Desire by H. Rider Haggard and Andrew Lang is credited on the copyright page of the January, 1972, US edition as by Vincent di Fate [sic].  The  Pan/Ballantine edition, published November 1972, has no artist credit.  Here's the cover of the US edition: 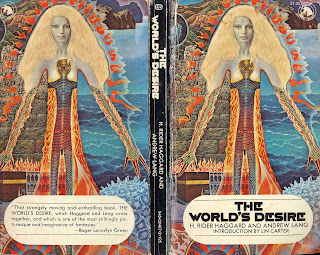 And here is the cover for the UK edition.  Note the Pan logo at the bottom of the spine, and the Commomwealth prices at the top right of the rear cover (with "Not for sale in Canada"). This Pan/Ballantine edition also has a different ISBN from the US edition: 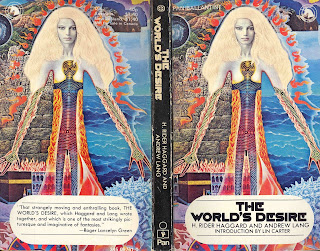 The art is not actually by Vincent Di Fate, but by Mati Klarwein. The art (flipped left-to-right) is titled "Astral Body Asleep" and dates from 1968.  I reproduce it below, but encourage a visit to the artist's (annoyingly designed) website, where it doesn't seem possible to give a direct URL to "Image 15 of 135" 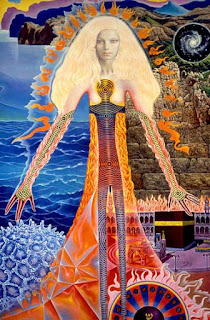 Posted by Douglas A. Anderson at 2:30 AM No comments: