This post is way overdue. I started it about a year and a half ago, when I noticed that two Tolkien scholars, John William Houghton and Michael Livingston, had new fantasy novels coming out in the autumn of 2015.  I thought it would make an interesting post to call attention to their books and other similar ones written by Tolkienists.  The task grew in the making, and I tried different methods of organization before settling on the simplest and fairest—alphabetical by author. (Click on the covers to see larger images.)

The Friendly Horror & Other Weird Tales (Myth Ink Books, 2013) is a collection of weird fiction, six stories written together by both authors, with two introductory poems (one by each author alone), and an Introduction by Burdge and an Afterword by Burke.These are horror stories of a Lovecraftian type, and one of the standouts, the title novella "The Friendly Horror"—it is nearly one hundred pages—records the history of a Innsmouth family and their ice-cream making business! The illustrations by Luke Spooner nicely complement the stories.

I might also mention an anthology, Dark Tales from Elder Regions: New York (Myth Ink Books, 2014), compiled by Anthony Burdge and Jessica Burke (with their names in opposite order from their collection above). Both Burdge ("The Lonely Boat") and Burke ("Ghosting") each contribute one story, and the book is again illustrated by Luke Spooner (who also contributes an introductory "A Word from the Artist").  Noted Lovecraftian W.H. Pugmire also contributes a story, "The Hand of Bone."

Matt Dickerson published two historical fantasies, The Finnsbugh Encounter (1991), which covers the events which led up to the Battle of Finnsburgh, and sequel, The Rood and the Torc: The Song of Kristinge, Son of Finn (2014).


More recently Dickerson has published the first two volumes of a fantasy trilogy, The Daegmon War, comprising volume one, The Gifted (2015), and volume two, The Betrayed (2016).  The third will be titled The Mountain.

Dickerson's first book was a self-published collection of fantasy and science fiction stories, The Ultimate Freedom and Other Tales (1988).

Verlyn Fleiger's first novel  Pig Tale (2002) tells the story of Mokie (which means, we are told, “little pig girl”) who is linked in some way with the little pig she has adopted and named Apple.  Mokie is also a foundling who at age fifteen is brutally raped by teenage boys, after which she flees with the pig into the woods where she meets a trio of symbolic characters. Overall the story is a mix of Celtic folklore, with a bit of Shirley Jackson (specifically “The Lottery”), and a dose of George MacDonald. This is a well-written if rather dark tale.  Flieger followed it up with a sequel, The Inn at Corbies' Caww (2011).

Flieger has also written some short stories, including "Avilion: A Romance of Voices" which appeared in James Lowder's The Doom of Camelot (2000), and the Tolkienesque tale "Green Hill Country" which appeared in my own anthology Seekers of Dreams: Masterpieces of Fantasy (2005).

John William Houghton's first novel, Rough Magicke (2005), contains three sequential stories which make up a kind of supernatural, Christian occult thriller, centering on Fr. Jonathan Mears and the Annandale Military Academy. It is more Charles Williams-esque than Tolkien-esque. Its sequel, Like a Noise in Dream (2015), came out in October 2015.


I should also mention Houghton's collection of poetry, Falconry and Other Poems (2003), which I especially enjoyed for its personal touches. And Houghton's play, The Lay of Baldor: A Play for Voices, had a public reading in 2009 at the Kalamazoo International Medievalist's Congress. It has been published in the free online journal The Year's Work in Medievalism Volume 30 (2015), available at this link, where you can download a pdf.

Michael Livingston has now published two volumes of his historical fantasies of Roman times. The first, The Shards of Heaven (2015), is now available in paperback. The second, The Gates of Hell (2016), is still in hardcover.

Livingston has published other fiction.  I think his first short story—actually a novelette—was "The Keeper Alone" in L. Ron Hubbard Presents Writers of the Future Volume XXI (2005).  There were others in Black Gate magazine, and more recently at tor.com. Here is his tor.com original story "At the End of Babel"; and here is an extract from his first novel. For the same website he has done some interesting non-fiction pieces of interest to fantasy readers.  These appear under the title "Medieval Matters", and you can find an index of them here.


Jared Lobdell has published a Tolkien-esque story as a booklet, Seeking the Lord (2015) limited to 100 copies, with Myth Ink Books (it has no ISBN, so look for details at the publisher's website here).  Though, like in Flieger’s “Green Hill Country,” no Tolkien-specific names are used, the tale is essentially about Gondorian young men of the early Fourth Age finding trouble. Quite nicely done.

Addenda: Lobdell has a collection of four interlinked stories about which I didn't know: The Four Corners of the Tapestry: A Casebook of Palmer Hopkins (1999).

I don’t think it’s a secret that “Edward S. Louis” is really Wisconsin novelist, teacher and medieval scholar E.L. Risden. In 2005, he published a short book Sir Severus le Brewse. In 2014, this book reappeared as the first half of  The Monster Specialist (from Walking Tree Publishers, known for publishing Tolkien criticism). It's a mix of Arthurian motifs with a graceful touch of humor.  Sir Severus is one of the least known of Arthur's knights because he preferred to fight monsters.  Here he joins with the sorceress Lilava in the Greatest Monster Battle of All Time.

Another noteworthy novel is Odysseus on the Rhine (2005), a final adventure for Odysseus, who travels north on a mission looking for lost Trojans and in the meanwhile encounters many obstacles, giving a twist to familiar aspects of myth and legend.

The late Anne C. Petty published some suspense novels set in Florida and written in collaboration with P.V. LeForge, but she also published two of a planned quartet of fantasy novels.  The first, Thin Line Between (2005),  was published under the byline M.A.C. Petty, which did not take advantage of Petty’s name-recognition. A second edition, under her usual name, came out in 2011, tied in with the release of the second volume  Shaman’s Blood (2011). I was asked for a blurb and gave the following:

"Anne Petty's Wandjina fantasies feature some marvelously drawn characters from modern Florida in collision with the world of Australian aboriginal dreamtime, via a collection of art and family mysteries. Readers of contemporary fantasy and horror will find an interesting freshness in these compelling tales."

Petty published one other dark fantasy novel, The Cornerstone (2013) and she contributed a novella “We Employ” to Limbus, Inc. (2013), a shared-world anthology about a mysterious metaphysical employment agency.

As "John Holm", Tom Shippey was co-author with Harry Harrison of "The Hammer and the Cross" trilogy.  Of course the publisher tried to hide it, so only the well-known Harrison's name appears on the covers, though both names appear on the title pages. The story is set in an alternative Dark Ages, and tells the story of the bastard Shef, driven by strange dreams. The books are The Hammer and the Cross (1993), One King's Way (1995), and King and Emperor (1996).  I'm not sure what the division of labor was between Harrison and Shippey, but I suspect much of the medieval detail was contributed by Shippey.

Under his own name “Enemy Transmissions” appeared in Hitler Victorious (1986), edited by Gregory Benford and Martin H. Greenberg, followed by “A Letter from the Pope,” with Harry Harrison, in What Might Have Been Volume II (1990), from the same two editors.  Another short story, “The Low Road,” appeared in Destination Unknown (1997), edited by Peter Crowther.

All of Martin Simonson's fiction (that I know of) has come from Portal Editions, whose website is unfortunately not very user-friendly. Books usually appear from Portal Editions in Spanish and in English (and sometimes in other languages), and Simonson's books are related or overlapping with others in some ways that I haven't been able to determine. Simonson wrote one book by himself, Shadows in the Woods (2010), translated into English by Robert Birch. Simonson co-wrote with R.M. Gilete some books in the Scarecrow Project, including The Scarecrow and the Storms: 1 Golgrim's Keys (2009), translated into English by Joe Jenner and Martin Simonson. There is another, apparently completely different book, which I haven't seen, confusingly titled The Scarecrow and the Storms: 1 Golgrim's Keys: The Book of Adventure (2012?), which has a different ISBN. Then there is a further volume (not seen by me) labeled The Scarecrow and the Storms 2: Anatomy of Air (2011) by Simonson and Gilete, also translated into English by Robert Birch.  So that counts up to four books, two of which I haven't seen. Of the two I have (covers illustrated at right), one is the 2009 Golgrim's Keys, which concerns young  Mirluc and his adventures in a fairy tale land.  It's aimed at a slightly younger audience than is my usual fare, but it's well-written and very entertaining.  Fans of L. Frank Baum (and I am one) will enjoy it.  Shadows in the Woods is another story of Mirluc, but it isn't titled as part of the Scarecrow and the Storms series, though it apparently is. What I wish I knew is: how many books are in the series, and in which order should they be read. Portal Editions don't have much distribution in the US, which is too bad, for I think these books would be welcomed here by readers. They are well printed and with attractive covers (by Anke Eissmann).

Update (2/28/17):  I have it on good authority that the original trilogy of The Scarecrow and the Storms was to have been:

Shadows of the Woods is a spin-off from the original trilogy.
Golgrims Keys: The Book of Adventure is a kind of game-book.

Doubtless I've missed some authors.  Feel free to point them out in the comments!

****
Addenda:  Here are a few Tolkienists whose fantasy novels are new to me.

Bridgwater's first fantasy novel (co-authored with Alistair McGechie) was Perian's Journey, which originally came out in 1989 and was reissued in 2014. You can read a bit about it here.  A kind of mythological prequel, Shadows of the Trees, came out in 2015, and this will be followed soon by a third book, by Bridgwater alone, entitled The Dry Well.  It is a direct sequel to Shadows of the Trees.

Rosegrant's "Gates of Inland" has three books out so far, with the fourth coming very soon. They are Gatemoodle (2013), Kintravel (2014), Rattleman (2016), and Marrowland (forthcoming 2017).  You can find out more about them at the author's website, here.

The author notes: "These are Young Adult fantasies but with depth that appeals to adult readers as well. They integrate traditional fairy tale and folk tale themes and Tolkienian concerns with modern searching for meaning and love. Two more novels are expected to complete the series." 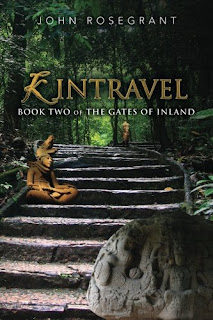 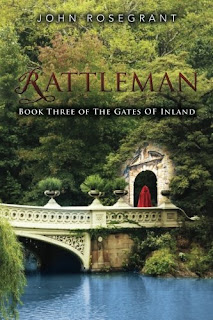 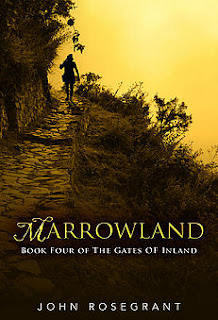