Tolkien and Sterling Lanier: the "Lord of the Rings" Figurines

The details of Tolkien's epistolary friendship with the US editor, writer and sculptor Sterling Lanier (1927-2007) are difficult to ascertain, and various accounts differ as to the chronology and extent of their correspondence.  In 1973, Lanier wrote that "it began in 1951" and amounted to some "dozen or so letters we exchanged over the years." In a 1974 fanzine profile of Lanier by Piers Anthony, it notes that Lanier had had "ten years of correspondence" with Tolkien. In 2016,  a book dealer had for sale six letters from Tolkien to Lanier, plus one from Tolkien's wife. That batch began in 1965, when Tolkien had received a second batch of Lanier's sculptures of characters from The Lord of the Rings. Tolkien's wife wrote that Tolkien thought the dwarf very good. Though Lanier sculpted professionally, and made his living at it for years, the Lord of the Rings figurines were never released publicly and photographs of them have been few and hard to find.

Now the same book dealer who had the Tolkien-Lanier letters, has a set of the Lord of the Rings figurines for sale. Here is the page from the recent catalog, along with details of the seller. (Full disclosure: I have no relationship with the seller, nor any involvement with the sale. I am publicizing it here solely because of the chance, at long last, to see the set of figurines and share the photographs with other Tolkien fans. So far as I know, only one photograph--of the Legolas figurine--appeared in print previously, and that as long ago as 1974.) Click on the images to make them larger. 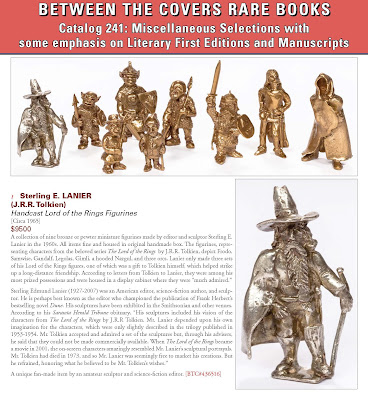 The obituary of Lanier (quoted in the listing) from the Sarasota Herald Tribune is inaccurate in many ways, particularly with regard to the legalities involved in officially licensing any reproduction of the figurines.  Tolkien himself did not control such rights, and his publisher told him (a fact related by Tolkien to Lanier) that such merchandising rights were controlled by United Artists, who--at that time, subsequent to a 1969 contract--owned the film rights to The Lord of the Rings, and Tolkien noted that it would please him if it proved possible for Lanier to market his figures subject to paying a small fee to United Artists. But it appears that Lanier never attempted to do so.

How many figures Lanier did of Lord of the Rings characters, or how many sets, is not known for certain. Clearly some of the ones he first sent to Tolkien were trials. As late as November 1972 Tolkien was thanking Lanier for a new bronzed set.

The above set for sale shows nine figures, Gandalf at the left in pewter, with the other eight in bronze, left to right, an orc, Samwise, another orc, Frodo, a third orc, Gimli, Legolas and a hooded Nazgul.

Charles Roberts has an interesting post at the Wonder Book Blog on Lanier, titled "A Sterling Character." Here's the direct link.  (Lanier was a regular customer at Wonder Books beginning around 1985 or so.) I reproduce below two of the photos from that blog, one with several figurines that Lanier had given to Roberts, in the middle of which you can see Legolas, Frodo, and a hooded Nazgul.  Roberts quotes a previous sale listing for a set of figurines as one of only three sets.  The second photo is one of Lanier himself. 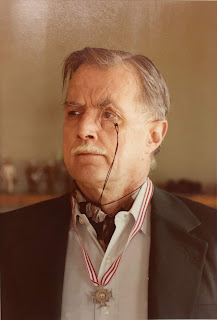 Finally, here is a photograph of Lanier's sculptures for three other famous literary characters, Ratty, Toad, and Mole from Kenneth Grahame's The Wind in the Willows. 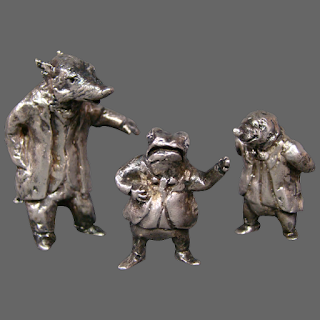