Reports of printed copies of Tolkien Studies volume 8 being received have reached me from a couple of sources, though my own copies haven't yet arrived.  Nor does it currently (at the time of posting) seem possible to order the new volume via the West Virginia University Press order page, alas. [UPDATE: this has finally been fixed.]

Also on the Tolkien front, Doug Kane sends news of the imminent release of the paperback of his Arda Reconstructed, which has a redesigned cover, which I post here courtesy of Doug.  It looks quite nice.

Paul Edmund Thomas has passed along some further information on the forthcoming reprint of E.R. Eddison's Styrbiorn the Strong, coming from University of Minnesota Press. It will indeed have the exquisite decorations by Eddison's brother-in-law, the artist Keith Henderson.  But the best news of all is that it will contain previously unpublished material intended for the book written by Eddison himself.  This includes a 1000 word dedicatory epistle to his brother Colin, and a 1500 word closing note that was used only in a very brief form, edited to less than a page.  Add to this Paul's Afterword and this makes for the most complete, and most desirable edition of Styrbiorn ever. One of Keith Henderson's decorations can be seen on the dust-wrapper to the original Jonathan Cape edition (right).

The dust-wrapper design of the Albert & Charles Boni edition (left) is uncredited, but Paul suggests that it is by Boris Artzybasheff, who certainly did the (also uncredited) design for the Boni edition of The Worm Ouroboros (published, like Stybiorn, in 1926).


In my previous post I observed that by 1976 the publishing practice of comparing anything to Tolkien, in order to attempt to sell it,  had reached a ubiquitous level. Seeing Leonora Carrington's The Hearing Trumpet blurbed in the 1976 Pocket paperback edition as "a fantasy world that brings to mind the writings of Tolkien" set me to wondering how and when this phenomenon started.  I first read Tolkien in the summer of 1973, and I recall that by the time Terry Brook's Sword of Shannara came out in April 1977, the blurb on it ("For all those who have been looking for something to read since The Lord of the Rings") was utterly meaningless. So when did this start?

The earliest occurrence I can find (on a paperback volume) is actually appropriate.  It appears on the first printing (April 1967) of the Ballantine edition of The Worm Ouroboros by E.R. Eddison, where it says "an epic fantasy to compare with Tolkien's 'Lord of the Rings'." The cover is even by Barbara Remington, who did the covers for the Ballantine paperback editions of The Hobbit and the three volumes of The Lord of the Rings in 1965.  Can anyone find anything earlier, or some other pre-1970 uses? Perhaps even on hardcover volumes? I will note here that I checked the cover of every volume of the Ballantine Adult Fantasy series, which ran from 1969-1974, and didn't find any such thing. Of course that was when the firm was run by Ian and Betty Ballantine---after they sold out and left in 1974, things changed.  Lester del Rey and Judy-Lynn del Rey ran the fantasy and science fiction imprints, and we can thank Lester del Rey for the careers of both Terry Brooks and Stephen R. Donaldson, boths triumphs of marketing over quality.

The other question that emerges out of this is how far were publishers willing to stretch credulity (and logic) in order to compare something to Tolkien.  What books got such misplaced attempts at marketing?  I do not mean this question necessarily to refer to literary quality, or the lack thereof.  Certainly Leonora Carrington's book is of a high quality and it seems merely publisher cynicism that they would attempt to market it so directly to the masses they perceived to all be Tolkien readers. Another case like this is Franz Werfel's Star of the Unborn (1946), which Bantam resurrected in May 1976 with the following description:  "A vision as magnificent and far-reaching as Tolkien's Lord of the Rings or Frank Herbert's Dune".  It is labelled "Fantasy" on the spine, and the cover has a definite fantasy feel.  Again, it's of high literary quality, but of a style quite different from the high literary quality of Tolkien. Of course, in the wake of the moderate success of the Ballantine Adult Fantasy series, which revived all sorts of older books and gave them them a "fantasy" label, thus bringing about the birth of a publishing category, publishers were looking for anything they might so label as fantasy.  Newcastle tried its own Forgotten Fantasy series which ran to more than a dozen books.  And I'm grateful to have seen such books reprinted at that time or perhaps it might have been years before I encountered them, so there certainly are plusses to consider in the growth of the label. 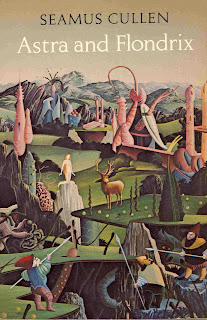 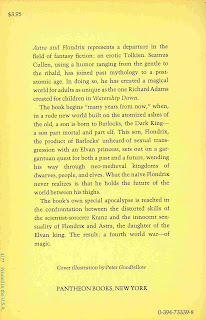