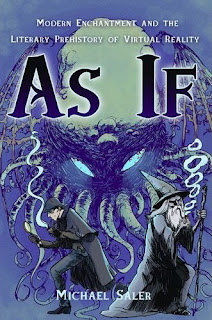 A quick post here to say that Michael Saler's long-awaited book, As If: Modern Enchantment and the Literary Prehistory of Virtual Reality, is on the threshold of publication.  I say threshold because the Kindle edition is currently available (click here), and the hardcover and trade paperback versions, published by Oxford University Press, are due imminently.  (The author tells me that Amazon says the publication date is January 9th, but he's just got his own copies so it should be shipping sooner.)

The hifalutin subtitle, "modern enchantment and the literary prehistory of virtual reality", mainly refers to the idea of modern imaginary worlds, in which authors and their readers share in willing suspension of disbelief.  So the book covers the Arthur Conan Doyle's Sherlock Holmes stories, H.P. Lovecraft's Cthulhu Mythos, and Tolkien's Middle-earth. The book examines how fans began to inhabit imaginary worlds persistently and communally starting in the late 19th century, in effect transforming them into virtual worlds that presaged contemporary virtual reality.

I read the Tolkien chapter in advance, and can say it represents a fascinating look at Tolkien from the outside looking in (i.e., culturally and historically), rather than (what is usual in Tolkien studies) from the inside looking at the details or the literary background of specific aspects of Tolkien's invented world.  The trade paperback is currently priced at $27.95 (though who knows if Amazon may discount it after publication). Recommended.

**Update 12/12** The trade paperback is now in stock. Click here for the Amazon page.
Posted by Douglas A. Anderson at 1:47 PM No comments: