The Ballantine Adult Fantasy series ended in 1974. Other publishers had capitalized on the trend of marketing books as fantasy, and some publishers had started their own lines. Bantam Books was then well-known for their science fiction line, and at this time they marketed a small number of their titles as Fantasy. This advertisement (from a Bantam book published in the Spring of 1976) gives a list. 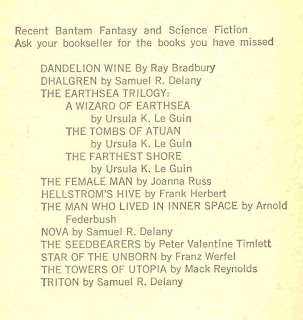 The most significant fantasy titles that were published by Bantam between 1974 and 1976 are the three volumes of the Earthsea Trilogy (back then there were only three books). All three have nice uncredited covers: the art is by Pauline Ellison (b. 1946)--there is a nice profile of her: Part one here; and part two here. (I confess I'm more fond of her style of illustrations as shown in part one.) The Bantam paperback of A Wizard of Earthsea came out in August 1975; The Tombs of Atuan in September 1975; and The Farthest Shore in October 1975. 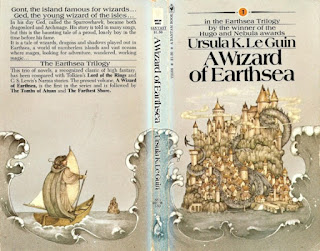 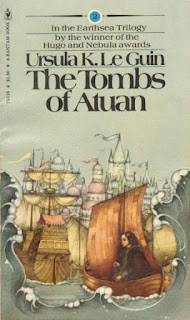 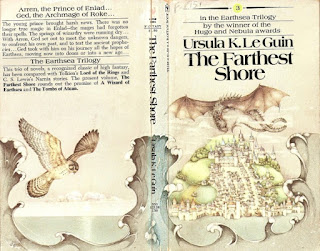 The other two fantasy titles are odder and off-trail books. The first is The Man Who Lived in Inner Space, by Arnold Federbush (1935-1993), published in May 1975. It is labelled "Fantasy" on the spine. 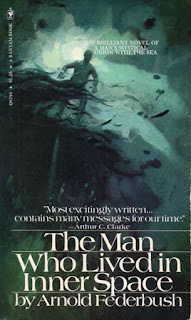 The final book is Star of the Unborn by Franz Werfel (1890-1945), who was born in Prague but wrote in German. The original edition was posthumously published in 1946, and translated into English in the same year by Gustave O. Arlt. It is a strange visionary novel that reminds one of works by Olaf Stapledon and David Lindsay. The Bantam edition (labelled Fantasy on the spine) was published in May 1976. The intriguing cover art is by Gene Szafran. 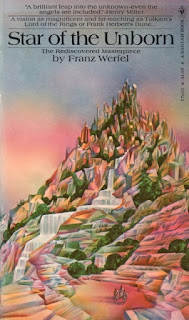 These five titles make for an odd fantasy list, but most of them would not have been out of place in the original Ballantine Adult Fantasy series, and would also be of considerable interest to readers of the Ballantine series.


Posted by Douglas A. Anderson at 3:00 AM No comments:

The Ballantine Adult Fantasy series proper began with the May 1969 publication of The Blue Star by Fletcher Pratt. Over the next year Ballantine published one or two additional titles per month, and other publishers were certain to have noticed the success of the series.

Paperback Library was one such outfit. It had been founded in 1961 and by the end of the decade it was known for publishing a lot of science fiction, a lot of westerns, and a lot of tie-in books to the popular television series Dark Shadows. Their attempt to move into the fantasy market was in the end limited to four titles, all published in 1970. It was apparently not very successful. Warner Communications bought the firm in 1972, and by 1972 the Paperback Library output had descended to a trickle, with the final books coming out in early 1973.

The fantasy imprint apparently had no name, beyond the label of "Paperback Library Fantasy Novel" which appeared at the top of the front cover of each book. However, like the unicorn masthead of the Ballantine Adult Fantasy series, these four books each have a device of a centaur wielding a bow and arrow.

The four titles are as follows:

The Francis Stevens book has an introduction by Sam Moskowitz, riddled with his usual errors (this introduction is the source of the erroneous idea that H.P. Lovecraft had written an appreciation of Francis Steven back in 1919. Lovecraft's fellow Providence resident Augustus T. Swift had in fact written a letter to Argosy in 1919 in praise of Stevens. Moskowitz simply presumed that Augustus T. Swift was probably a pseudonym of Lovecraft's, and Moskowitz began his introduction by quoting a long passage from Swift's letter, attributing it to Lovecraft, and not even mentioning Swift's name).  The cover artist's name is not printed anywhere, but you can clearly see the artist's signature, Steele Savage, in the art itself in the lower middle of the front cover. 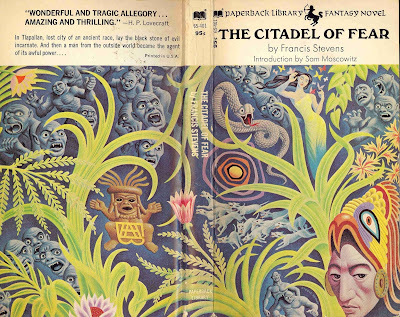 The three volumes in Jane Gaskell's trilogy had previously been published as "science fiction" by Paperback Library in 1968. With the new October 1970 printings, they are each now labelled as "A Paperback Library Fantasy Novel." And they have new uncredited cover art, but I'm pretty sure the art is by Michael Leonard. 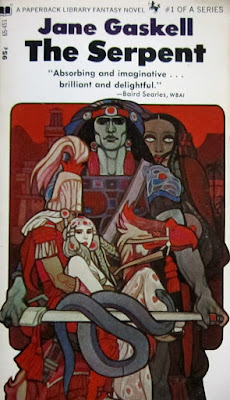 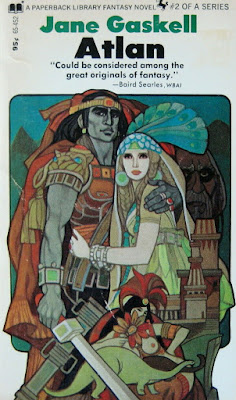 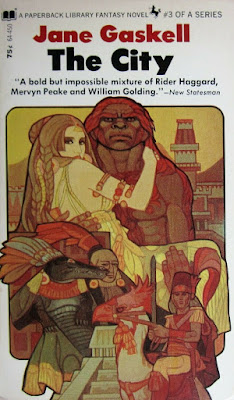 There is one further release from Paperback Library of potential interest. This is the September 1971 issue of The Tritonian Ring by L. Sprague de Camp. It was published not as a fantasy, but as science fiction. Yet the cover art (uncredited, but probably by David McCall Johnston, who did some covers in the Ballantine Adult Fantasy series, including those for the Evangeline Walton books), and the blurb comparing it to Tolkien's The Lord of the Rings, certainly give more of a fantasy vibe than a science fiction one. 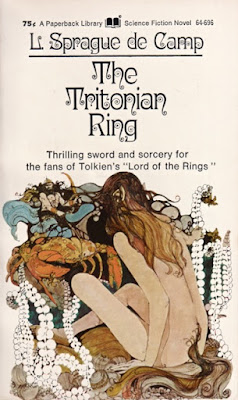 P.S.  I'm adding here the cover of the William Ready book on Tolkien as mentioned by David Bratman in the comments below. The cover art is clearly meant to recall Barbara Remington's mural published on the 1965 Ballantine editions of The Hobbit and The Lord of the Rings. 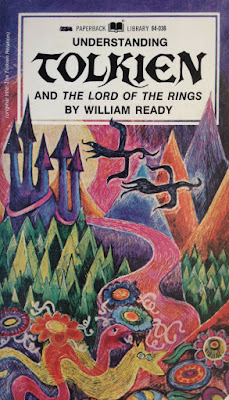 Early Dust-Wrappers of The Worm Ouroboros by E.R. Eddison 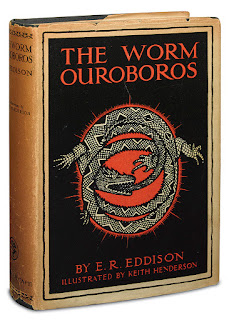 An American edition, published by Albert & Charles Boni of New York, appeared four years later, to the month, in May 1926.  It retained all the interior illustrations by Keith Henderson, yet has a new dust-wrapper illustration. Here is the wraparound dust-wrapper of the 1926 edition, followed by the same art's appearance on the endpapers. 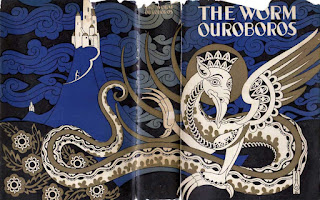 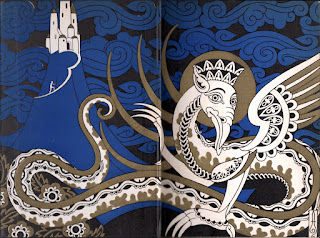 The artwork is uncredited, and a bookseller recently catalogued it as by Henderson, but it's not in Henderson's usual style, and I have long understood that the art was by someone else. But by whom? Here  is a closeup of the artist's recognizable monogram from the lower righthand corner: 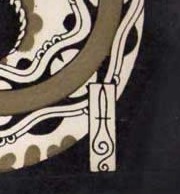 The stylized "A"monogram was regularly used by the Russian-born American artist Boris Artzybasheff (1899-1965). Here is a similar worm-styled creature from a closely contemporary book, The Wonder Smith and His Son (1927) by Ella Young, which was wholly illustrated by Artzybasheff. This art is spread over two facing pages. 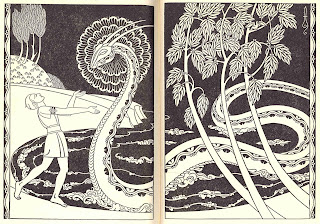 Notice the stylized "A" monogram at the upper right of the art.  And compare the eye-motifs running all along the top of the serpents' bodies in both illustrations. The motifs are closely similar. Clearly the art on the dust-wrapper of The Worm Ouroboros was by Artzybasheff, not Henderson.

What about Artzbasheff's art did Morris find so objectionable?  His letters make it clear that Morris thought that "dragons are the most beautiful and graceful of God's creatures: surpassing the swan for grace, the gazelle for beauty."  Artzybasheff's dragons, particularly the one on The Worm Ouroboros, are more comical than beautiful, and not representing the elegant and spiritual creatures as envisioned by Morris. As talented as Artzybasheff clearly was, his art was not a good match for the writings of Kenneth Morris. Nor for those of E.R. Eddison as well.
Posted by Douglas A. Anderson at 1:00 AM 1 comment: