Note: as per my previous January 9th blog post on the sale of hardcovers of Tales Before Tolkien, I should have enough remaining copies of this book to extend the sale through the end of March.  Same terms and ordering procedure as in the original post.[update March 31st, 2016. This special has now ended.]

After all the media nonsense in the last few weeks about newly discovered "lost" Tolkien poems (actually discovered three years ago), I commend Troels Forchhammer for correcting the record in his post here.  The little bit I can add is to say that the first fruit of Humphrey Carpenter sharing with me his notes on then-undiscovered Tolkien appearances were the poems in Leeds University Verse 1914-1924 (1924). This booklet includes three Tolkien poems, "An Evening in Tavrobel," "The Lonely Isle," and "The Princess Ni."  The table of contents to a proposed collection of Tolkien's poems that Troels suggests was The Adventures of Tom Bombadil was for an entirely different collection.  Tolkien's first planned poetry collection was The Trumpets of Faerie, which was turned down one hundred years ago by Sidgwick & Jackson on March 31st 1916 (no doubt some journalist will seize upon this apparent "anniversary" and inflict an inaccurate puff-piece upon the world). After this rejection, Tolkien kept a kind of working collection through the 1920s and late 1930s, intending this collection to become a published volume, which he submitted to two publishers in the 1920s. The proposed table of contents that gives the publication information on "Shadow-Bride" ("The Shadow Man") probably dates to the very late 1930s. 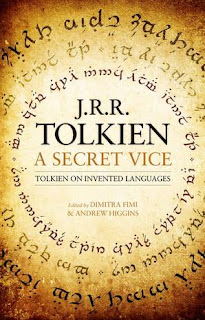 It's great to see Dimitra Fimi and Andrew Higgins's edition of A Secret Vice: Tolkien on Invented Languages announced for publication in the UK on 7 April 2016, in hardcover and ebook formats.  The publisher's description notes that:

This new critical edition, which includes previously unpublished notes and drafts by Tolkien connected with the essay, including his ‘Essay on Phonetic Symbolism’, goes some way towards re-opening the debate on the importance of linguistic invention in Tolkien’s mythology and the role of imaginary languages in fantasy literature.


And due out next week is a new collection of fifteen essays on science fiction by Tom Shippey, Hard Reading, from Liverpool University Press at some hideous price (£75.00, hardcover, same price for the ebook!). The publishers description reads:

The fifteen essays collected in Hard Reading argue, first, that science fiction has its own internal rhetoric, relying on devices such as neologism, dialogism, semantic shifts, the use of unreliable narrators. It is a “high-information” genre which does not follow the Flaubertian ideal of le mot juste, “the right word”, preferring le mot imprévisible, “the unpredictable word”. Both ideals shun the facilior lectio, the “easy reading”, but for different reasons and with different effects. The essays argue further that science fiction derives much of its energy from engagement with vital intellectual issues in the “soft sciences”, especially history, anthropology, the study of different cultures, with a strong bearing on politics. Both the rhetoric and the issues deserve to be taken much more seriously than they have been in academia, and in the wider world. Each essay is further prefaced by an autobiographical introduction. These explain how the essays came to be written and in what ways they (often) proved controversial. They, and the autobiographical introduction to the whole book, create between them a memoir of what it was like to be a committed fan, from teenage years, and also an academic struggling to find a place, at a time when a declared interest in science fiction and fantasy was the kiss of death for a career in the humanities.

Grevel Lindop's long-anticipated biography Charles Williams: The Third Inkling came out in late 2015, and I've been reading it, with admiration for the biographer, and enlightenment (as well as bewilderment) on the subject. I've just seen the first (to me) extensive review of it, by A.N. Wilson in First Things (click here to read it).  It's got the usual dose of Wilsonian pronouncements and his bombastic tone, but overall I tend to agree with much of what he says.

Posted by Douglas A. Anderson at 4:30 PM No comments: