Since the publication of Verlyn Flieger's edition of The Lay of Aotrou and Itroun in 2016, there has been much renewed attention to Tolkien's five-hundred and six line poem, originally published in The Welsh Review in December 1945.  Little notice, however, has been made of the fact that the original Breton poem was sung to a ballad.  Last year I got a copy of Miracles & Murders: An Introductory Anthology of Breton Ballads (Oxford University Press, 2017), by Mary-Ann Constantine and Éva Guillorel.  Besides a long introduction, this anthology contains some thirty-five Breton ballads (or gwerz), with musical scores, and, most significantly, a CD containing recordings of twenty-two of the ballads.

The first gwerz in the anthology, and the first on the CD, is "Lord Count and the fairy." Constantine and Guillorel note that "the tune is an old one, in three musical phrases with repetition of the second line of text. On the whole this is a stable gwerz with relatively few variables; though it is often known by the Barzaz-Breiz title 'Lord Nann and the Fairy', most versions have a 'Lord Count' or a 'Count Tudor' as their protagonist" (pp. 38-39).

Towards the end of her edition, Flieger gives the opening verses from Breton, French and English versions of the ballad.  I reproduce her page 97 here: 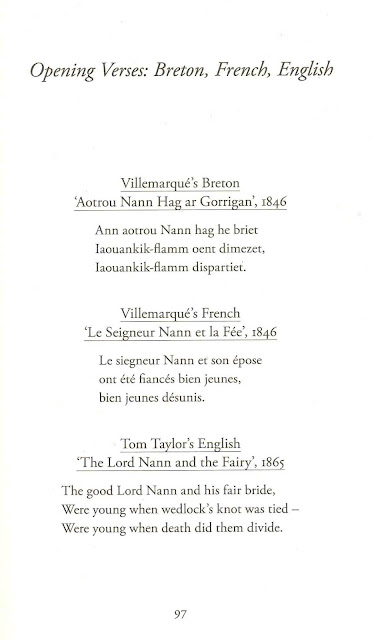 In Miracles & Murders, a Breton original is given as well as an English translation.  It consists of some twenty-six stanzas, most of which are of three lines, with the third line in most stanzas (but not all) being the repetition of the second line, as noted above by Constantine and Guillorel.  Here, for comparison, are the first two verses of "Lord Count and the fairy," in Breton and below it in English:

And here is the music:

From the CD I have excerpted the first stanza of the gwerz as sung.  If I've done this right, you can access it here:


What is most interesting to note is that the lines from Tolkien's poems also scan with the music, if you follow the same formula of repeating every second line.  Try it for yourself.  Here follows the appropriate lines from the beginning of Tolkien's poem:

Tolkien was known to use folk-songs as tunes for some of his poems, most notably those in Songs for the Philologists.  One suspects he might have known this tune as well.