The contents of Tolkien Studies volume 8 have gone live at Project Muse (the subscription database accessible in most universities and some public libraries). Jason Fisher first noted this on his blog, but you may need (for a time) to finagle the URL a bit to access the newest issue (read the comments at his blog entry).  Jason and a couple other people have also commented on the length of the review-essay of The Ring Goes Ever On: Proceedings of the Tolkien 2005 Conference: 50 Years of“The Lord of the Rings”.  Yes, indeed, it is large. But there are various reasons. In fact the first half was done and should have appeared in volume 7 last year, but we had to cut something, for a too large issue came together very late.  And usually a volume of essays has something like ten to twelve essays in it, so in order to have an in-depth reviews, one needs space, often 3,000 to 5,000 words.  And with the one hundred essays in the massive two-volumes of The Ring Goes Ever On,  well, you can easily do the math.  I'll leave the matter there--personally I think the extended coverage is justified in many ways.  And it is so much more than a book review, which is why it was given the header of review-essay.
John Rateliff gave this new blog a kindly welcome at his own blog. John's most recent (as of this writing) entry tells of the passing of the 20th Lord Dunsany, the artist and architect Edward John Carlos Plunkett (1939-2011), the grandson of the fantasist. I had been going to post a note about this, but John has said most of what I would have, so I'll merely refer readers to John's post and add a few points here.  First, one of Dunsany's late fantasy stories, a partial return to the form of thirty years earlier, was written in 1946 for his seven-year old grandson. This is "The Dwarf Holobolos and the Sword Hogbiter" which John has described in his thesis on Dunsany as a “blending of ‘Fortress Unvanquishable Save for Sacnoth’ with Don Rodriguez, borrowing its style from one and the flavor of its marvels from the other. Amusing but not up to Dunsany’s usual standards.” It was first published in Collins for Boys and Girls no. 1 (July 1949), and reprinted in Worlds of Fantasy & Horror (a temporary re-titling of Weird Tales magazine), Summer 1994. The other point I'd like to make is that it's worth checking out this link to see examples of the artwork of Edward Plunkett. (Click on the header “Catalogue”.) 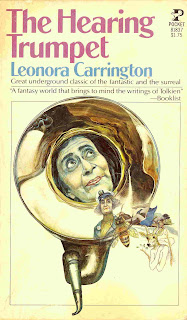 I'd also like to make mention of the passing of Leonora Carrington (1917-2011), the last of the original surrealists. She died in Mexico, where she had lived for almost seventy years. A major figure in twentieth century art and sculpture, her fantasy fiction hides in the shadows of her other achievements, but it does have a following. Perhaps her most notable literary work is the novel The Hearing Trumpet (translated into French in 1974 and published in English in 1976, with illustrations by one of her sons, Pablo Weisz-Carrington). Here's the cover from my 1977 Pocket books edition, sporting the ubiquitous (even in those pre-Sword of Shannara days) blurb comparing it to Tolkien.  Among her other writings are the short novel The Stone Door (French translation 1976; English original 1977), and the collections The House of Fear: Notes from Down Below (1988), and The Seventh Horse and Other Tales (1988). Obituaries appear in The Guardian and in The New York Times. 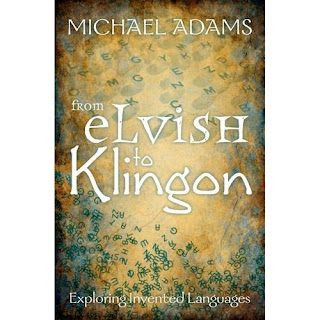 And a new book on the horizon is the long-awaited anthology of essays from Oxford University Press, From Elvish to Klingon: Exploring Invented Languages, edited by Michael Adams.  Tolkienist Arden R. Smith contributes the opening chapter on "International Auxiliary Languages", and the chapter on "Tolkien's Invented Languages" is by Edmund Weiner, one of the three co-authors of The Ring of Words: Tolkien and the Oxford English Dictionary.  The new collection is scheduled for November.  See the Amazon page.

Eddison's Styrbiorn to be reissued!

The University of Minnesota Press has announced for their Fall 2011 list a long overdue reissue of E.R. Eddison's historical novel Styrbiorn the Strong, originally published in 1926 by Jonathan Cape in London and Albert & Charles Boni in New York. The original editions sported decorations by Keith Henderson (no word on whether they are to be included in the new edition).  New material to the University of Minnesota Press edition will include an Afterword by Tolkien-scholar and Eddison-specialist Paul Edmund Thomas.  Amazon lists the republication to be in August, while the Minnesota Fall 2011 catalog says September, but I believe this has been pushed forward another month or two.

The dust-wrapper blurb on the original Cape editions reads as follows:

The Swedish prince, called Styrbiorn the Strong, after a meteoric career in which he shook the lands of the Baltic, fell in the year 983, still in his early youth, in the attempt to wrest the kingdom from his uncle.

The writer follows history closely. His intimate knowledge of the Viking civilization and spirit is taken at first hand from the ancient literature of the North. In his swift, dramatic narrative he takes no sides, but leaves his actors--Styrbiorn, King Eric the Victorious, and his fatal queen--to impress their personalities on the reader by their own words and actions.

Styrbiorn was Eddison's second novel, the next after The Worm Ouroboros  (1922).  It was followed in 1930 by Eddison's translation of Egil's Saga, after which Eddison returned to his invented world of Zimiamvia, with Mistress of Mistresses (1935), A Fish Dinner in Memison  (1941), and the posthumous Mezentian Gate (1958).

We do not know the precise date that Tolkien first encountered Eddison's writings (beyond Tolkien's comment that it was "long after they appeared"), but it is very probable that Tolkien read them soon after his friend C. S. Lewis discovered them in late 1942.  Lewis frequently shared his enthusiasms with Tolkien and other members of their small literary group, the Inklings.  Lewis in fact wrote a fan letter to Eddison on 16 November 1942, calling The Worm Ouroboros "the most noble and joyous book I have read these ten years".  Eddison replied and sent Lewis a copy of Mistress of Mistresses.  A correspondence developed, such that Lewis hosted Eddison at a dinner-party in Oxford  on 17 February 1943.  There Eddison met Tolkien, Charles Williams, and Lewis's brother, Warnie.  Eddison read aloud the chapter "Seven Against the King" from A Fish Dinner in Memison, then published only in the United States.  Eddison returned for a second gathering of the Inklings on 8 June 1944, reading a chapter from his work-in-progress The Mezentian Gate. Tolkien wrote to his son Christopher that this new chapter was "of undiminished power and felicity of expression".

The main source of Tolkien's views on Eddison is a letter Tolkien wrote to Caroline Everett for her M.A. thesis at Florida State University.  The letter, dated 24 June 1957, contains the following paragraph:

"I read the works of Eddison, long after they appeared; and I once met him [sic].  I heard him in Mr. Lewis's room in Magdalen College read aloud some parts of his own works—from Mistress of Mistresses, as far as I remember [sic].  He did it extremely well.  I read his works with great enjoyment for their sheer literary merit.  My opinion of them is almost the same as that expressed by Mr. Lewis on p. 104 of the Essays Presented to Charles Williams *.  Except that I disliked his characters (always excepting Lord Gro) and despised what he appeared to admire more intensely than Mr. Lewis at any rate saw fit to say of himself.  Eddison thought what I admire 'soft' (his word:  one of complete condemnation, I gathered);  I thought that, corrupted by an evil and indeed silly 'philosophy', he was coming to admire, more and more, arrogance and cruelty.  Incidentally, I thought his nomenclature slipshod and often inept.  In spite of which, I still think of him as the greatest and most convincing writer of  'invented worlds' that I have read.  But he was certainly not an 'influence'."  (The Letters of J. R. R. Tolkien, 1981, p. 258)


Styrbiorn as an historical novel set in the old North is about as far removed from Eddison's invented world of Zimiamvia as you can get, but the gorgeous prose is as seductive as ever. This long-overdue reissue is an event.


Footnote:
* Lewis wrote:  "You may like or dislike his invented worlds (I myself like that of The Worm Ouroboros and strongly dislike that of Mistress of Mistresses) but there is no quarrel between the theme and the articulation of the story. Every episode, every speech, helps to incarnate what the author is imagining. You could spare none of them.  It takes the whole story to build up that strange blend of renaissance luxury and northern hardness.  The secret here is largely the style, and especially the style of the dialogue.  These proud, reckless, amorous people create themselves and the whole atmosphere of their world chiefly by talking."
Posted by Douglas A. Anderson at 8:31 PM 1 comment:

Tolkien Studies volume 8 at the Printer

Tolkien Studies volume 8 is at the printers, and finished copies are expected to begin shipping towards the end of June. 311 pages this time.  The cover reproduces two extracts of letters by R. Q. Gilson as detailed in John Garth's very moving article.

The table of contents is reproduced below:

1 “Legend and History Have Met and Fused”: The Interlocution of Anthropology, Historiography, and Incarnation in J.R.R. Tolkien’s “On Fairy-stories”
Philip Irving Mitchell

23 Tolkien’s Goldberry and The Maid of the Moor
John M. Bowers

97 The Hen that Laid the Eggs: Tolkien and the Officers Training Corps
Janet Brennan Croft

143 Review-Essay: The Ring Goes Ever On: Proceedings of the Tolkien 2005 Conference: 50 Years of“The Lord of the Rings” two volumes, edited by Sarah Wells
Deidre A. Dawson

297 Bibliography (in English) for 2009
Compiled by Rebecca Epstein and David Bratman with Michael D.C. Drout, Merlin DeTardo, and Douglas A. Anderson

See the publisher's website.
Posted by Douglas A. Anderson at 12:38 AM 3 comments: