I'm saddened again to report another death, this time of novelist and children's literature expert, Alison Lurie, at the age of 94. A long time ago I was one of her students, and we kept in occasional touch and swapped books in the years afterwards. She gave a nice blurb for the 1996 reissue of The Marvellous Land of Snergs, by E.A. Wyke-Smith, the 1927 children's novel that inspired The Hobbit. I recall that she also asked me for suggestions for inclusion in her Oxford Book of Modern Fairy Tales (1993), and presented me with an inscribed copy on publication. 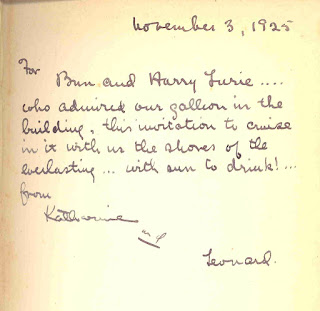 Around 1990, I had picked up an inscribed copy of Leonard Cline's first novel God Head (1925), and when it arrived in the mail, I noticed the inscription was to Bun and Harry Lurie, from a time when Cline and his second wife were in Chicago, and I knew Alison had been born in Chicago in 1926, so I rang her up and asked the obvious question.  "Those are my parents." she replied. "And I remember that book.  It has a face embossed in the cover."  Her parents had lived in Detroit, where Cline had worked on the Detroit News and where he had many connections. Alison also recalled Cline's second wife, Katharine Gridley (another Detroiter), and put me in touch with her sister Jennifer Cooke who told me what she could about the Gridley family.  Alison also suggested an explanation of the inscription (see right), and said that lots of apartment buildings at that time had paintings of old galleons on the walls as you entered.

I always found Alison kind and friendly, unlike many of my other professors back then.  I read a good number of her books, and reviewed one, her short story collection Women and Ghosts, a few years ago at Wormwoodiana.

The obituary at The Guardian sums up her achievements nicely.

Posted by Douglas A. Anderson at 11:56 PM No comments: