It is with great sadness I note the passing of my old friend and fellow Tolkien and fantasy scholar Richard C. West, from covid-19.  He passed in the early morning of Sunday, November 29th, 2020, in Madison, Wisconsin, and will long be missed. He was 76. 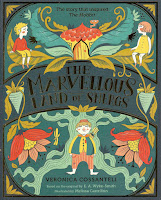 It is fairly well-known that the 1927 children's novel The Marvellous Land of Snergs by E.A. Wyke-Smith was popular with J.R.R. Tolkien and his children, and was an important influence on The Hobbit (1937).  There have been a  number of editions reprinting this important book, including its iconic illustrations by George Morrow.

Just published in England is a new book titled The Marvellous Land of Snergs, but it is here credited to Veronica Cossanteli, with illustrations by Melissa Castrillon. It is said, on the cover and title-page, to be "based on the original by E.A. Wyke-Smith." But what does that really mean? 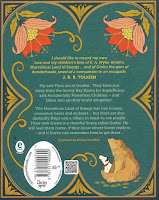 The book is published by Chicken House of Frome, Somerset, and the publisher Barry Cunningham describes in "A Message from Chicken House" opposite the title page that, while he loved the original Snergs book, he found it old-fashioned, so it has been "reimagined" for today's young readers. The cynical would note that the original book is in the public domain, and that the publisher has commissioned a modernized knock-off, published under the original title so as to confuse readers into thinking they are reading something close to the original book. But this new version is not very close to the original book, though it takes some of the original characters and scenes, adds to them a bunch of new characters and scenes, sometimes renaming them, and sometimes remaking them into entirely different characters. And the process of modernization tends to diminish Wyke-Smith's sharp humor, making for a very bland result.
That a cynical approach to this exploitation is appropriate is shown in a number of ways.  The front cover boasts that this version is "The story that inspired The Hobbit."  It is not.  The rear cover shows prominently Tolkien's famous commendation of the original edition--it is a recommendation for the original book, not for this bowdlerized version. The publisher also evidently wavered on how to credit the authorship of the book, for an earlier cover is currently still on the web (at Amazon.co.uk, for example) which gives the authorship as by "E.A. Wyke-Smith retold by Veronica Cossanteli" (see at right; click on the covers to enlarge).

Both scholars of Tolkien, and readers wishing to experience the book that Tolkien and his children loved, should avoid this exploitation and instead seek a reprint of the original. It is sad to see Wyke-Smith's book treated in this manner.