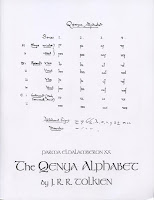 Just published is The Qenya Alphabet by J.R. R. Tolkien, edited by Arden R. Smith, issue number 20 of the journal Parma Eldalamberon.  Here Smith presents some forty documents by Tolkien, examples of his Elvish lettering that is now known as tengwar and associated with Fëanor, though at the time of creation of these documents, beginning in 1931, there is no indication of these associations.  The documents are a motley bunch---some are clearly examples of Tolkien practicing the craft: there are excerpts copied from Lewis Carroll's "The Walrus and the Carpenter" in Through the Looking-Glass, from the Pater Noster, from "God Save the King", and from various contemporary letters that Tolkien had written (to E.V. Gordon and C.S. Lewis, among others).  And there are also examples in various styles of handwriting, from versions with pointed letters, to more cursive ones, formal and less formal. Arden Smith has done an excellent job presenting these documents, transliterating them as well as presenting normalized versions, and providing a wealth of commentary. For, in addition to the information on the elvish writing system, there are a number of biographical and literary insights that can be gleaned from the examples Tolkien used. Highly recommended. For ordering details, click here.

Over at the blog Mythoi, Morgan Thomsen has a very interesting post about "Tolkien and the Illustrations of Robert J. Lee".  It describes eighteen illustrations to a reprint of chapter one of The Hobbit in an anthology The Children’s Treasury of Literature, edited by Bryna and Louis Untermeyer, published in England in 1966.  While Thomsen makes many interesting points, the context around this anthology is much more complex and deserves to be delineated further.

The Children's Treasury of Literature is merely the British retitling of the American anthology The Golden Treasury of Children's Literature (1966), which itself is only a selection of material from a ten-volume series, published from 1961 through 1963 by the Golden Press, the New York office of the Western Publishing Company of Racine, Wisconsin, a publisher known in America for the "Golden Books" series of books for children (hence the "Golden" in the U.S. title, which doubtless meant little to a British audience so the word was removed). Tolkien's chapter from The Hobbit, with the illustrations by Robert J. Lee, originally appeared in volume 5, Wonder Lands (1962). This volume begins with extracts from The Little White Bird by J.M. Barrie (including the first appearance of the character Peter Pan, predating Barrie's play), a section from Kenneth Grahame's The Wind in the Willows, followed by the Tolkien chapter, then an excerpt from The Happy Moomins by Tove Jansson, and sections from T.H. White's The Sword in the Stone, Lewis Carroll's Alice's Adventures in Wonderland and Through the Looking-Glass, George Macdonald's The Princess and the Goblin, and Dinah Maria Mulock Craik's The Little Lame Prince. Interestingly, the other excerpt that Robert J. Lee illustrated in this volume is that by Tove Jansson, who was herself an illustrator, and coincidentally in the same year as this volume was published (1962) she illustrated the Swedish translation of The Hobbit.

Thus Robert J. Lee's illustrations date from 1962, not 1966, and in that context can be understood as coming from the time before the explosion of popularity of Tolkien's work which began in 1965, not after it, and perhaps in some small way this volume contributed to that great surge in public awareness. Robert J. Lee (1921-1994) was born in California, and educated at the Academy of Art in San Francisco.  He was an instructor at the Pratt Insitute in Brooklyn in 1955-56, and became an associate professor at Marymount College in Tarrytown, New York, in 1962. The first of many books he illustrated was This Is a Town (1957), by Polly Curran, and Lee did other work for the Golden Press, including Fifty Famous Fairy Tales (1965). 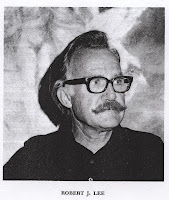 
Of course the success (or lack thereof) of Lee in capturing the essence of Tolkien's story remains in the eyes of the beholder.

Finished copies of Tolkien Studies volume 9 (2012) have recently shipped, and the text of this volume has been available via the subscription database Project Muse for some weeks now.  When I left Tolkien Studies back in March, I had already drafted some of what would have become the "Book Notes" section for this volume.  Since the content of what I wrote is not covered in the new volume, I figure I might as well share it below.

Perhaps the most curious Tolkien publication of 2011 was a new edition of Oliphaunt, a twenty-four page picture book illustrated by Dan McGeehan, published by The Child's World, Mankato, Minnesota, part of their series of "Poetry for Children". Oddly there is no mention of copyright for the Tolkien poem, and this edition was apparently withdrawn soon after publication.  ISBN 9781609731557.

Another curious publication that appears to be a new book is J.R.R. Tolkien's Double Words and Creative Process: Language and Life, by Arne Zettersten, published by Palgrave Macmillan. Though the book itself gives no hint, it is merely a translation into English (presumably by the author himself) from the Swedish original, Tolkien--min vän Ronald och hand världar [Tolkien: My Friend Ronald and His Worlds] (Stockholm, 2008).  Though much of it is based on previous Tolkien scholarship, Zettersten adds interesting recollections of conversations with Tolkien. His style is, unfortunately, discursive and repetitive. Price $85.00. ISBN 9780230623149.

The Journal of Inklings Studies debuted in 2011, with two issues, no. 1 (March 2011) and no. 2 (October 2011).  These issues are predominately concerned with C.S. Lewis, and the only Tolkien-related content is a book review of Dinah Hazell's The Plants of Middle-earth, a book published five years earlier in 2006. One hopes for more (and timelier) Tolkien coverage in future volumes. For more information, see www.inklings-studies.com. ISSN 2045-8797 (print); 2045-8800 (online). 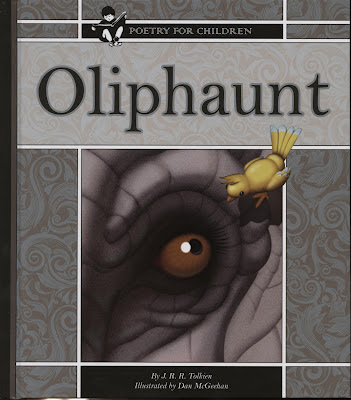 Here's the cover of the 2011 version of Oliphaunt. I note that the publisher's website gives more details, showing a few sample pages, but says that "This product is not available for purchase (Withdrawn from sale)". See here.
Posted by Douglas A. Anderson at 7:30 PM 2 comments: