Here is another piece, drafted long ago, for which I never sought publication because of its short length.

In 1964, J.R.R. Tolkien was invited to contribute to a children’s anthology, the first of a proposed annual series, being edited by Caroline Hillier. Tolkien sent the editor three possible poems in early December 1964, two of which were accepted.  The three poems included one written for an American girl named Rosalind Ramage who had written Tolkien a fan letter in October 1964;  a new poem written in early December 1964 entitled “Once Upon a Time”; and a revised version of Tolkien’s poem “The Dragon’s Visit”, originally published in The Oxford Magazine in 1937.  The poem for Rosalind Ramage was not accepted for reasons of space (it remains unpublished), and Hillier was torn about accepting the other two, also because of space limitations, but in the end she took both.  The revised version of “The Dragon’s Visit” and “Once Upon a Time” appeared in Winter’s Tales for Children: I, published in October 1965.  Both poems were reprinted in The Young Magicians (1969), edited by Lin Carter. 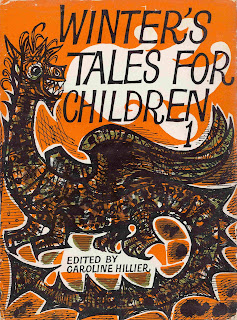 Winter’s Tales for Children: 1 was the first of a series that lasted for four volumes from 1965 through 1968.  Caroline Hillier edited only the first two volumes; the third volume was edited by Kevin Crossley-Holland, and the fourth, by Ted Hughes. Besides the Tolkien poems in the first volume, there are contributions by Ted Hughes (one poem), Rosemary Sutcliff (one story); Philippa Pearce (a story); Kevin Crossley-Holland (one story and three Old English riddles translated into modern English); and Elizabeth Jennings (two poems), who was coincidentally a friend of the Tolkien family for many years.  The volume is illustrated by Hugh Marshall.

Tolkien’s poem “Once Upon a Time” is especially interesting because it is a poem about Tom Bombadil written two years after the collection The Adventures of Tom Bombadil and Other Verses from The Red Book was published, and, more importantly, because there is a mystery to the poem itself with regard to some creatures described in it called lintips.

“Once Upon a Time” is comprised of three stanzas of fourteen lines, each stanza beginning with the phrase “once upon a –”; and the final line of each stanza starting with “once upon a time”. The rhyme-scheme runs aabbccddeeffgg, but the opening line of each stanza also has an internal rhyme—e.g., for stanza one, “Once upon a day on the fields of May”.  The first stanza centers on Goldberry, and she is stooping over a lily-pool and blowing away dandelion clock (i.e., the white seeds that form after flowering).  It is interesting to note the description of “earth-stars” that have opened in the green-grass, whose steady eyes watch the sun climb up and down.  The “earth-stars” are presumably geastrales, an order of various types of fungus commonly called “earth-stars” that are related to puffballs.

In the second stanza, which begins “Once upon a night in the cockshut light”, the earth-stars are closed, and Tom—the Bombadil surname is never given in the poem—is wandering in the wet grass under the stars.  Most interestingly, in lines 9-11, the Moon rises and under his white beams silver drips from stem and stalk of the grass “down to where the lintips walk / though the grass-forests gathering dew”.  Here the lintips are introduced, and they are apparently very small, for they move about near the ground in “grass-forests” where they gather dew.

Lintips become the central focus of the third and final stanza, which begins “Once upon a moon on the brink of June /a-dewing the lintips went too soon.” Tom notices them and kneels down, saying:  “ ‘Ha! little lads! So it was you I smelt? / What a mousy smell!’” (l. 4-5) Tom tells them to drink the sweet dew, but to mind his feet.  The lintips laugh and move away, leaving Tom to comment that they are the only things that won’t talk to him, or “say what they do or what they be” (l.10). The lintips are as much a mystery to Tom, as they are to the reader of the poem.

Basically, lintips are small creatures that move in the grass during the night and drink dew, and they have a mousy smell. They could be mice, voles, or insects of some sort.  The name lintip/lintips may be an invented word of Tolkien’s like mewlips, some creatures who also feature in a single poem. Additionally, one turns to the O.E.D. without finding any real-world analogues. With the hint in line fourteen of the first stanza, that the poem is set in “an elvish land”, one wonders if lintip might be of elvish construction. The stem lint/lin could be interpreted in elvish in a number of ways (the better of several possible stems include Q lint fluff, down, soft stuff; Q linte swift, quickly nimble)*, but the ending –ip/–tip is not of normal elvish construction, and seems to point lintip away from being an elvish word.

It seems that whatever lintips are, they will remain as much a mystery to us as they were to Tom.  When I queried Christopher Tolkien on this point, he replied “On lintips I fear I am a total blank” (letter dated 3 September 2005).

Thanks go to Christopher Tolkien, Alan Reynolds, Carl Hostetter, John Garth, and Eileen Moore, for comments on lintips sent to me over the years.

* I note also that in “A Secret Vice” Tolkien wrote:  “I can also remember the word lint ‘quick, clever, nimble’, and it is interesting, because I know it was adopted because the relation between the sounds lint and the idea proposed for association with them gave pleasure.”  (The Monsters and The Critics, p. 205).
Posted by Douglas A. Anderson at 3:00 AM