Pre-1970 Paperbacks with Comparisons to Tolkien

Thanks in particular to Dale Nelson, and a few others who emailed me, I can now post a follow-up on what books published before 1970 have blurbs with comparisons to Tolkien.  There are no hardcovers here simply because I don't know of any, and no one suggested any **but see the comments below**.  Here are the results, chronologically (and subject to future revision!):

1965:  The Ace edition of Alan Garner's The Weirdstone of Brisingamen.  Interestingly, Ace had published their pirated edition of The Lord of the Rings in May (volume one) and July (volumes two and three) of 1965. The three volumes have cover art by Jack Gaughan, as does the Ace edition (G-570) of The Weirdstone of Brisingamen.  The blurb here merely calls the book "a fantastic novel in the Tolkien tradition." 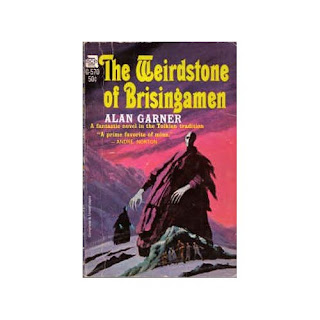 1966 brings us two candidates.  The first published was probably Conan the Adventurer (Lancer Books, 63-526), by Robert E. Howard and L. Sprague de Camp. The front cover (with artwork by Frank Frazetta) doesn't make any comparion to Tolkien, but on the rear cover it says in large letters: "Adventures more imaginative than 'Lord of the Rings'". Conan the Adventurer was the first of an eleven volume series, but it is the only one with a blurb mentioning Tolkien's works. 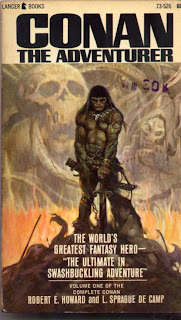 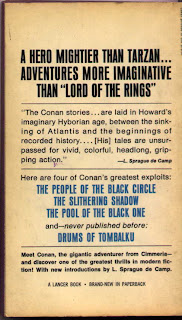 The other candidate from 1966 is bibliographically confusing, and sometimes erroneously dated to 1965.  This is the Ace Books edition of Frank Herbert's Dune, published in hardcover by Chilton in 1965.  (Tolkien was sent a copy of the book by its editor at Chilton, Sterling Lanier, an author in his own right and a correspondent of Tolkien's.  When the British edition of the book was to be published in 1966, the British publisher Gollancz also sent Tolkien a copy of the book, requesting a blurb.  Tolkien declined, saying he found the book too distasteful.) The paperback edition of Dune published by Ace Books is undated, but on the cover it highlights the fact that the book was the "Winner of the Hugo Award and the Nebula Award for Best Science Fiction Novel of the Year".  The Nebula Award's banquet had been held on March 11,1966, where the first Nebula Awards were presented by the recently-formed organization of Science Fiction Writers of America. The Hugo Award was announced at the 24th World Science Fiction Convention, held in Cleveland, Ohio, from September 1st-5th, 1966.  Thus, by these dates, the Ace Book edition of Dune could not have come out until around the end of 1966.  The mention of Tolkien's The Lord of the Rings comes in a blurb by Arthur C. Clarke on the rear cover, where he says of Dune: "I know nothing comparable to it except The Lord of the Rings." (Clarke himself was an acquaintance of Tolkien's. Sometime in the mid-1950s they had lunched together with C.S. Lewis in Oxford, and Clarke spoke again with Tolkien in September 1957 when Tolkien's The Lord of the Rings was presented with an International Fantasy Award, just following the 15th World Science Fiction Convention held in London.) 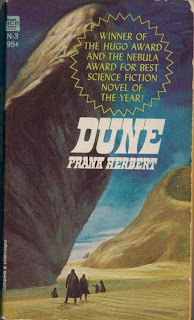 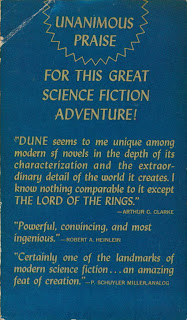 On to 1967, for which we have two entries **for three more entries, see addenda at bottom**, both books by E. R. Eddison and both published by Ballantine.  In April 1967 The Worm Ouroboros was published, and the front cover says "an epic fantasy to compare with Tolkien's 'Lord of the Rings'." (For the cover illustration see my previous post.)  Published in August 1967, Eddison's Mistress of Mistresses has a back cover blurb stating: "The second volume in the fantasy classic most often compared with J. R. R. Tolkien."
1968 brings another two examples, the first being the Paperback Library edition of L. Sprague de Camp's The Tritonian Ring, with a cover by Frank Frazetta. Here is the first real blurb that aims directly at Tolkien's readers:  "Thrilling sword and sorcery for the fans of Tolkien's 'Lord of the Rings.'" 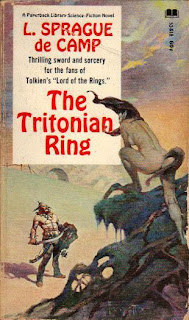 And next we have another Alan Garner book, again published by Ace (G-753), The Moon of Gomrath.  On the back cover, it says "Here, told with the talent of a Tolkien and the wonder of an Andre Norton, is what befell the two Earthlings . . ." At the bottom  of the rear cover there is a bizarre quotation from a review (presumably of the hardcover edition of 1965) that was published in The New York Times: "From one Tolkien shiver to another, there is a gripping power to these episodes."  The front cover art is by the late Jeffrey Catherine Jones (1944-2011). 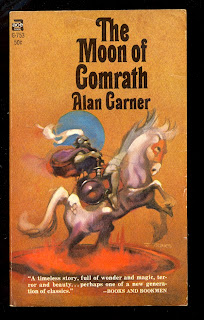 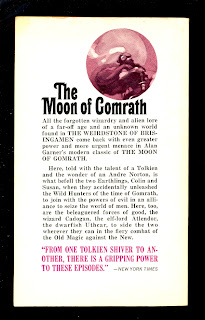 The final book comes from 1969.  Nancy Martsch (via Dale Nelson) noticed that I missed one occurrance of a Tolkien-related blurb in the Ballantine Adult Fantasy series.  The July 1969 Ballantine edition of William Morris's The Wood beyond the World has a phrase in the back cover, noting that "William Morris has been described as 'obviously a Nineteenth Century Tolkien . . .' " The blurb is backgrounded by some foliage in Gervasio Gallardo's typical style, as is often fond in his many glorious covers for the Ballantine Adult Fantasy series.  I do not know where the "obviously a Nineteenth Century Tolkien" quote comes from, but it sounds rather like Lin Carter, the "Consulting Editor" (not the Editor, who was Betty Ballantine) of the whole Ballantine Adult Fantasy series, which ran from 1969 to 1974.  I plan to post a bunch of my work-in-progress on this series in the future. 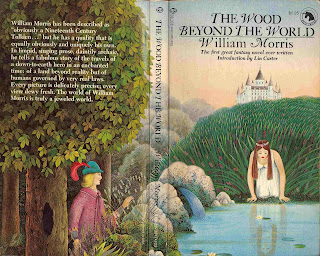 One last notice here. Thomas Kent Miller suggested the Curtis Books edition of Edison Marshall's The Lost Land (originally published as Dian of the Lost Land by Chilton  in 1968), but the undated edition by Curtis Books seems to have come out in 1972 (Curtis Books in fact published only between 1971-74), so that rules it out.  The blurb on it says:  "A Thrilling journey to a world beyond Middle Earth and Narnia". Here, at least, is an early misspelling of Middle-earth, a common error which continues to this day in major news organizations like The New York Times, which can never get it right. But a look at the wraparound cover for The Lost Land is still in order, for it's another Gervasio Gallardo cover, one of his more surreal types, but a Gallardo nonetheless, and one that isn't often seen. 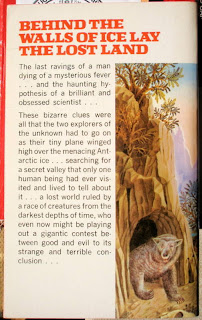 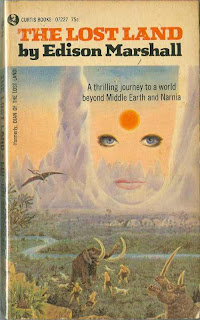 Interestingly, the bulk of these early blurbs seem to have originated with people who had some connections with Tolkien.  Betty and Ian Ballantine published The Hobbit and The Lord of the Rings with their firm in 1965.  The editor at Ace Books who published the pirated edition of The Lord of the Rings in 1965, and who published the Alan Garner books, was Donald A. Wollheim.  Though he professed himself to be no great fan of Tolkien's, Wollheim knew what sold, and was happy to supply book-buyers with what he expected would sell.  L. Sprague de Camp was another acquaintance of Tolkien's.  They began corresponding in 1963 and Tolkien entertained de Camp at his house in February 1967, as de Camp was returning to the U.S. from a trip to the Middle East and India.  Tolkien's acquaintance with Arthur C. Clarke and Sterling Lanier I have mentioned above, but one can also add Alan Garner's name to those connected to Tolkien.  Garner was a student at Magdalen College, Oxford, in the mid-1950s, and has acknowledged that he met both Tolkien and C.S. Lewis, though Garner claims that Tolkien's writings had no influence on him. Many readers question this assertion.


Addenda:  Thanks again to Dale Nelson, we now have three more entries for 1967.  I don't have the months of publication for these titles, so the order given here is random.  But all three are from Lancer Books, a mass market company that published around 2,000 titles from 1962 to 1973.  The editor (after 1965) was Larry T. Shaw, who had edited a number of science fiction magazines in the mid-1950s.  The first is L. Ron Hubbard's Slaves of Sleep (Lancer 73-573). 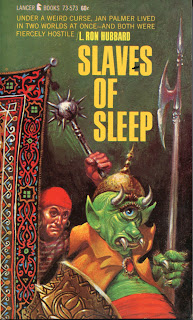 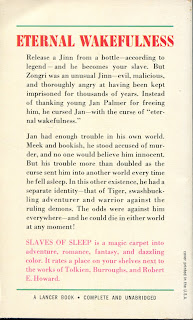 The requisite blurb is on the rear, and reads:  "SLAVES OF SLEEP is a magic carpet into adventure, romance, fantasy, and dazzling color. It rates a place on your shelves next to the works of Tolkien, Burroughs, and Robert E. Howard."


The next is a book by arch-Tolkien basher Michael Moorcock, The Jewel in the Skull (Lancer 73-688).  I don't have a scan of the back cover, where the blurb concludes:  "a stirring new saga of swords and sorcery by a brilliant writer, the first of a series destined to rank with the Conan series and the Lord of the Rings trilogy." 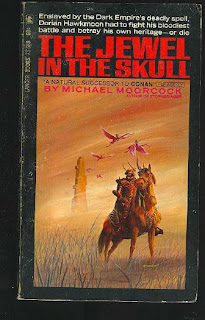 And finally, another Conan book, The Hour of the Dragon (Lancer 73-572), by Robert E. Howard and edited by the ubiquitous L. Sprague de Camp.  The blub on the front cover reads (somewhat ungrammarically): "Howard's only book-length novel, worthy to stand beside such heroic fantasy as E. R. Eddison and J. R. R. Tolkien." 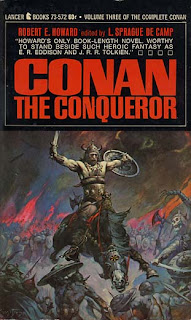 Posted by Douglas A. Anderson at 1:00 PM