In medieval superstition, two days of each month were accounted especially unlucky, the so-called dies mali in Latin, or dismal days in English. For me these dies mali of January will henceforward remind me of the deaths of two friends. Humphrey Carpenter, Tolkien's biographer, passed away on 4 January 2005 at the age of 58, and now, fifteen years later,  Christopher Tolkien has passed away in the night of 15/16 January 2020 at the age of 95. These two men taught me more than I can express about the literary life and what it means to be, and how to go about being, a literary scholar. I became friends with Humphrey in the summer of 1978 when I attended a summer program in Oxford. A few years later Humphrey put me in touch with Christopher. Though I had some excellent and helpful teachers in college, none of them affected me as profoundly, or as lastingly, as did these friendships with Humphrey and Christopher. It is too soon for me to comment about Christopher, but here I pass on my condolences to his family and to his wide following among Tolkien readers and scholars. Below I share a photograph, taken at Keble College during the Tolkien Centenary Conference in August 1992, of Verlyn Flieger, myself, and Christopher.  The postcard I am holding shows one of the faces and stone heads outside of the Sheldonian Theatre in Oxford.* I had just commented that that particular head epitomized how I felt just before delivering my talk at the conference. (The photo was taken by Marjorie Burns.) It is unfathomable to me that more than twenty-seven years have passed since that day. 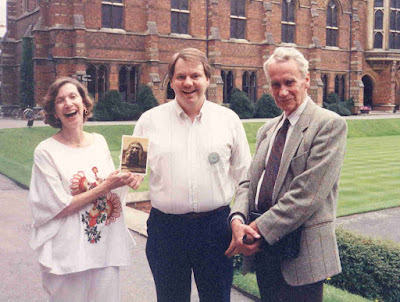 *I think. I still have one similar postcard that I bought on that same day.
Posted by Douglas A. Anderson at 11:23 PM