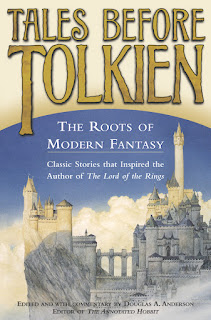 **update February 24th 2016. I've still got some copies of this book, and will extend this special sale to the end of March**

In resorting boxes of books, I've found a cache of new hardcovers of my 2003 anthology, Tales Before Tolkien (Ballantine Books). It was published simultaneously in hardcover (originally priced at $27.95) and trade paperback, but the hardcover didn't get very good distribution. In any case, I bought a number of copies from the publisher way back then, and I can offer these as brand new, fresh out of their boxes.  For the rest of January 2016, or until I run out of copies, I'll offer them for US$13 each, postpaid to US addresses.  I can sign/inscribe copies if requested to do so. Payment via Paypal, to nodensbooks[at]gmail[dot]com.

Anyone outside the US who is interested please inquire (to the same email address) and I'll see what the postage would be (some years ago, the international rates went up considerably. At a rough estimate, postage alone for this book to the UK, via the cheapest option of First Class International, now looks to be around US$26. Sorry, I'm aghast too.)

My original title for the book was Roots of the Mountain: Fantasy Before Tolkien, but the marketing department didn't like that. Here is the table of contents of the book:

“The Elves” by Ludwig Tieck
“The Golden Key”  by George Macdonald
“Puss-Cat Mew”  by E. H. Knatchbull-Hugessen
“The Griffin and the Minor Canon” by Frank R. Stockton
“The Demon Pope”  by Richard Garnett
“The Story of Sigurd”  retold by Andrew Lang
“The Folk of the Mountain Door”  by William Morris
“Black Heart and White Heart: A Zulu Idyll” by H. Rider Haggard
“The Dragon Tamers” by E. Nesbit
“The Far Islands” by John Buchan
“The Drawn Arrow”  by Clemence Housman
“The Enchanted Buffalo” by L. Frank Baum
“Chu-bu and Sheemish” by Lord Dunsany
“The Baumoff Explosive” by William Hope Hodgson
“The Regent of the North” by Kenneth Morris
“The Coming of the Terror” by Arthur Machen
“The Elf Trap”  by Francis Stevens
“The Thin Queen of Elfhame” by James Branch Cabell
“The Woman of the Wood” by A. Merritt
“Golithos the Ogre”  by E. A. Wyke-Smith
“The Story of Alwina” by Austin Tappan Wright
“A Christmas Play”  by David Lindsay

Email ThisBlogThis!Share to TwitterShare to FacebookShare to Pinterest
Labels: Tales Before Tolkien

The State of the Field in Tolkien Scholarship

First, a quick note to say I've uploaded to academia.edu my review of Smith of Wootton Major: Extended Edition edited by Verlyn Flieger.  Direct link here.  And a teaser below:

Smith of Wootton Major: Extended Edition, edited by Verlyn Flieger and utilizing the Bodleian Tolkien manuscripts, was first published in Great Britain in 2005. Ten years on there comes a newly formatted pocket edition (6 1/4 by 4 3/4 inches), slightly revised, and with some material new to this edition (mostly comprising illustrations by Pauline Baynes). Neither the 2005 or the 2015 edition has had distribution in the United States—scholars must order the British edition. The differences between the two editions are given a close comparison here, followed by an overdue and detailed description of some of the serious flaws of the original edition which, unfortunately, remain unaddressed in the new one. . . .


Second, I'd like to call  attention to  a piece by Thomas Honegger, also just posted at academia.edu, entitled "A Reviewer's Complaint."  It's a short, one-page piece, and you can read it all here. Basically, it notes some alarming trends in recent Tolkien scholarship, ranging from pure sloppiness and the lack of copy-editing, to the more serious lack of engagement with existing scholarship in the field.  I've noted these problems growing in occurrence for some years now. Some potential scholars seem to be treating scholarship as equivalent to the writing of blog-posts--chatty, personal, and one dimensional.  While blog-posts can be just those things (chatty and personal especially) they don't have to be. There are many bloggers whose blogs are up to rigorous standards of scholarship, and I think that's a good thing. Perhaps it is not amiss to suggest that bloggers might practice more scholarship, and that potential scholars should cease to emulate blogs. Honegger's charge that new scholarship exhibits a limited knowledge of the field is more serious and more problematic. The first "scholar" who comes to my mind as guilty of all these traits is Adam Roberts, whose publishing credits include some truly execrable parodies of Tolkien (they sold well enough in England that Roberts has been laughing all the way to the bank), and a cosmetic "revision" of Lin Carter's Tolkien: A Look Behind The Lord of the Rings (1969; "updated"--barely--by Roberts in 2003), which manages (among other problems) to retain Carter's basic errors of plot-points.  Roberts moved on to write a book-length blog on The Riddles of The Hobbit (2013), which simply ignores most previous scholarship on the subject. Yet the book was published by a respectable academic publisher, Palgrave Macmillan (What were they thinking?  Merely that they should publish some Hobbit-related book while the Peter Jackson Hobbit films were current? Palgrave should be ashamed.).  Roberts's contribution (on "Women"--probably the worst essay in an otherwise very good book) to Stuart D. Lee's Companion to J.R.R. Tolkien (published by another academic publisher, Wiley Blackwell) similarly has almost no engagement at all with  the work of other scholars. Yet on these credentials Roberts was invited to deliver the second "Pembroke Lecture on Fantasy Literature In Honour of J.R.R. Tolkien" on 2 May 2014, at Pembroke College Oxford. The mind boggles.  Here glib trendiness has pushed aside the opportunity for real scholarship, and the chance to honor Tolkien became instead a slap in the dead writer's face. How completely depressing. I (for one) think Honegger's complaint is too soft.

End of the Year Chatter

There has been a good number of book reviews posted at Journal of Tolkien Research since I last posted on this blog, and I invite readers to have a look at them. They include:

Access all of them, plus articles, via the front page of the journal.  More book reviews are in the works


A Shiver in the Archives

I've started an additional blog to highlight various discoveries (mostly minor) that I've made in my various researches, ones which don't really have a current place to be utilized, but ones which are worth sharing somewhere.  Check it out here.

Daniel Grotta (formerly Daniel Grotta-Kurska), who wrote the first biography of Tolkien, J.R.R. Tolkien: Architect of Middle Earth (Running Press, 1976), passed away in Philadelphia on 13 December 2015.  The error in the book's title ("Middle Earth" for "Middle-earth") is a harbinger for the quality of the text inside.  I'll say no more here about my few encounters with Grotta, but refer anyone interested to the comments section to a post from 2012 at Jason Fisher's blog, Lingwë, which you can access here.