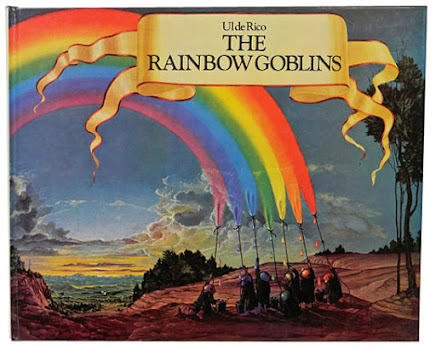 In recent readings of various books by Richard Adams, I pulled off the shelf one that I'd forgotten I owned.  It's The Legend of Te Tuna (1986), a 24 stanza poem based on figures from Polynesian mythology. It was originally published in a limited signed edition by a Los Angeles press in 1982, and then it appeared in a newly illustrated trade edition in England in 1986. I bought it not for the Richard Adams, but for the illustrations by Ul de Rico (the working name of Count Ulderico Gropplero di Troppenburg), and reading the book at last has inspired me to revisit the rest of Ul de Rico's work.  Sadly, it is a small opus.

Born in Udine, Italy, in 1944, he studied in the 1960s at the Munich Academy of Fine Arts, and has lived in Germany for many years.  He has published only four books, but might be better know for his art that appeared in a small number of films.  Notably, he worked in the art department and did the skies and clouds i 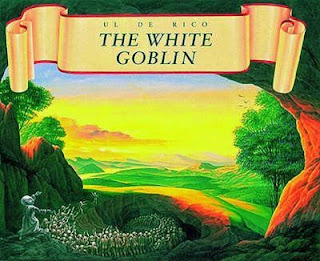 n the film Flash Gordon (1980).  He is credited as the "Scenery, creature and costume designer" for The Neverending Story (1984), which was filmed in Munich. It is based on Michael Ende's novel of the same name, but this film is more an orgy of color and puppetry than the reflection of a literary novel.  It brought about a filmic sequel, The Neverending Story II: The Next Chapter (1990), which is tepid and dull, and doesn't relate to the original novel.  Ul de Rico is credited in it as a character designer in the Animation Department, but I suspect that this refers to his creation of characters for the original film (the new characters invented for the sequel are quite lacklustre and uncharacteristic).

But it is Ul de Rico's books which I wish to discuss here. Particularly his first, which appeared in German as Die Regenbogenkobolde (1977), and was translated into English as The Rainbow Goblins (1978). I bought my copy around the time of its first English language publication.  It is a large unwieldy size, about 13 inches by 20 inches. But in this manner Ul de Rico's glorious artwork is showcased around his original short tale. (The paintings were done in oil on oak panels, and in my edition are reproduced at two-thirds the size of the originals. Later editions are in a smaller format.)  The story concerns the seven Rainbow Goblins, each of whom has his own color. They go on a quest to lasso the colors from the rainbow.  It's a delightful children's story, both in the tale and in the artwork.  Two decades later, Ul de Rico penned and illustrated a sequel, The White Goblin (1996).  While it's still enjoyable, the text has moved away from being a simple fairy tale to being that of a moralistic eco-fable. 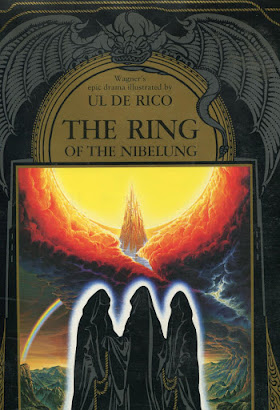 His other book reflects his interest in Richard Wagner. It is a retelling of The Ring of the Nibelung (1980), with thirty color paintings published in an oversized volume.  Ul de Rico notes in his introduction, "I did not want to produce stage designs, but have tried to use to the full the medium of book-illustration. This made it possible for me to interpret my ideas without considering the technical problems the stage would present." And that his retelling of the story "is intended only to explain the action in and between the illustrations."  It makes for a marvellous experience.

Oddly, the Richard Adams volume, The Legend of Te Tuna, is the least interesting of Ul de Rico's works.  Partly this is due to the small size of the book, and partly it is due to the fact that the color illustrations are spread over facing pages, with too much distraction owing to the book's gutter splitting the artwork.

P.S. This newly redesigned Blogger format is very user unfriendly, and it really makes it hard to place illustrations. :-(

Posted by Douglas A. Anderson at 9:38 AM